The population of Okapi in the world has just increase by one. Staff at Disney’s Animal Kingdom Lodge celebrated the arrival of a rare okapi on October 1, 2018. With around 20,000 okapi left in the wild any birth is move in the right direction for this endangered species

Weighing in at 54 pounds, the calf is the child of Zelda and Mandazi. Their partnership was part of the Species Survival Plan monitored by the Association of Zoos and Aquariums. The calf has been in a backstage habitat nursing and bonding with his mom. He won’t appear on the savanna for at least a few months while the bonding and development process continues.

The okapi is normally a shy and reclusive animal. Western researchers did not even observe on until 1901. It’s earned the nicknames “Ghost of the Forest” and “Forest Giraffe.” The latter signals that okapi are the only known living relative of the Giraffe.

The okapi population continues to decline due to poaching and habitat loss from commercial logging and mining. The Walt Disney Company, through the Disney Conservation Fund and its involvement in the AZA’s Species Survival Plan, has been at the forefront of okapi conservation for many years. The company has a long-standing relationship with the Okapi Conservation Project in the Democratic Republic of the Congo. 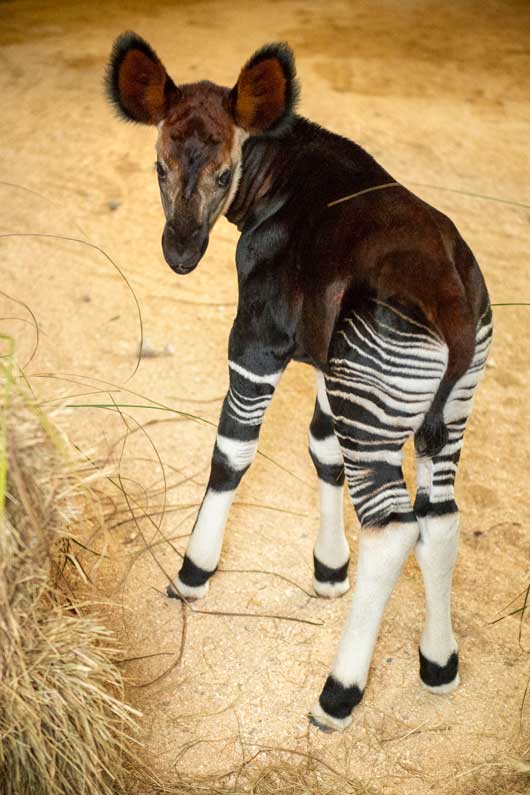 When the young okapi is ready he will join the savanna at Disney’s Animal Kingdom Lodge where guests can encounter more than 30 species of African Wildlife, including: zebras, giraffes, gazelles, and more. You don’t have to be a guest of the resort to enjoy the savanna, but we do suggest making a dining reservation to enjoy one of the great restaurants at both animal kingdom lodges.