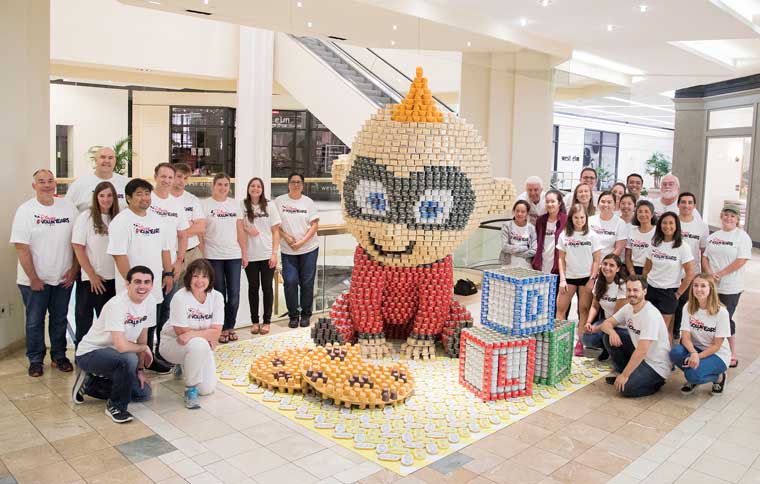 Disneyland Design and Engineering Cast Members showcase their own super powers to fight hunger by transforming 8,900 canned goods into a towering 10-foot Jack-Jack sculpture and his cookie num nums. This scene from Pixar’s “Incredibles 2” was created for the 11th annual CANstruction Orange County, which benefits the Orange County Food Bank.

Jack-Jack is Disneyland cast member’s 11th CANstruction creation built from canned goods since the event began. The structures have produced the equivalent of three meals a day for a family of three for 11 years.

“Teamwork is key to our role as designers here at Disney. It’s natural for us to carry that approach into the CANstruction project every year,” said Disneyland associate engineer Andy Flores. “We utilize the talents of graphic designers, architects, engineers and we develop some other specialized skills to accomplish our finished sculpture.”

The annual competition is a unique way to give back. “I’ve been participating in this competition for a few years now because I’m just so impressed by the concept behind it,” said Disneyland Resort Staff Engineer Tim Angers. “Could we just donate a huge pile of cans? Sure. But doing it this way – it increases public awareness. It shows people how big the need really is and hopefully, we can make a bigger difference than just the cans we donate.”

Disney VoluntEARS designed Jack-Jack over a period of six months and joined local architectural design firms in building creative structures for the design-build competition. The structures can be viewed in September at South Coast Plaza, John Wayne Airport and the Anaheim Regional Transportation Intermodal Center (ARTIC) before the food is donated to the Orange County Food Bank. Supporters can vote for their favorite structures online; $1 equals one vote and the proceeds go to the Orange County Food Bank.

“Disney cast members have helped educate people about the issue of hunger in a creative and compelling manner through magical and visually stunning structures that have entertained people,” said Mark Lowry, director of the OC Food Bank. “But most importantly, they have provided additional food to expand the capacity of the OC Food Bank to combat hunger.”

Through CANstruction Orange County and food drives, the Disneyland Resort has provided the OC Food Bank more than 69,000 meals for the local community over the last 11 years. Disney VoluntEARS regularly assist in quarterly food packing events, and in 2017, volunteered more than 1,800 hours at the food bank.

Jack-Jack will be on display at South Coast Plaza through September, then the canned goods will be donated to the food bank.