On your next visit to the American Adventure in EPCOT be sure to stop by and explore a new exhibit that brings American Indian history and culture to Walt Disney World. “Creating Tradition: Innovation and Change in American Indian Art” displays the work of contemporary Native artists alongside artifacts from centuries past, demonstrating how ancestral craftsmanship influences modern generations. It opened July 27th with a special dedication from the Florida Seminole Tribe.

The exhibition is located in the American Heritage Gallery inside The American Adventure pavilion. The 89 pieces on display represent 40 different American Indian tribes from seven geographic regions across the United States.

“At Epcot, guests are invited to celebrate the limitless possibilities of human imagination and innovation.” said Melissa Valiquette, vice president of Epcot. “By showcasing artwork from so many diverse American Indian tribes, ‘Creating Tradition’ is a wonderful way to share a vital part of the United States’ culture with all those who visit The American Adventure.”

“Creating Tradition” also offers three interactive video exhibits where contemporary American Indian artists share perspectives on their work and culture. When guests wave their hands in front of a display resembling a campfire, the “flames” transform into a video presentation. Music playing in the gallery, performed by Native musicians, supports the objects and regions represented throughout the exhibition. 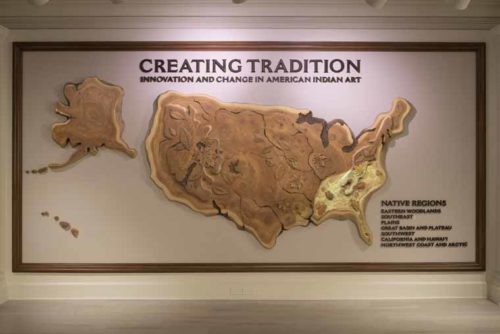 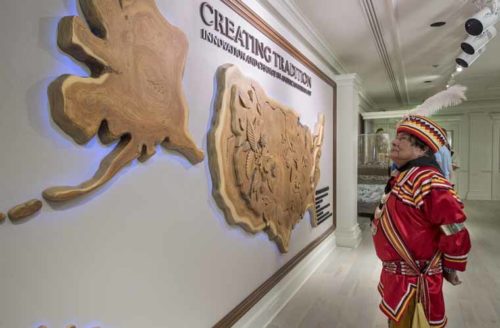 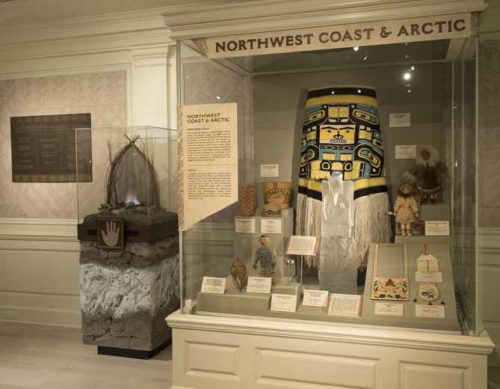 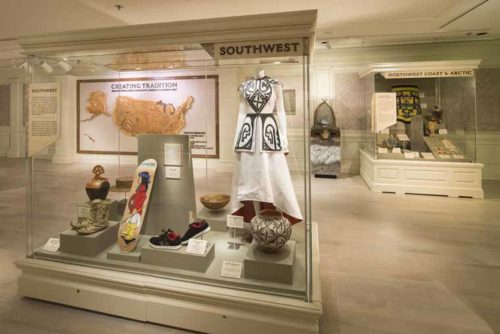 The new art exhibition is produced in collaboration with the Smithsonian’s National Museum of the American Indian in Washington, D.C., and the Museum of Indian Arts and Culture in Santa Fe, New Mexico. Leaders from both cultural institutions were on hand for the gallery opening.

“I am delighted to recognize this association with Disney as their leadership shares the vision and creativity of contemporary American Indian artists with international visitors,” said Kevin Gover (Pawnee), director of the National Museum of the American Indian. “We hope Epcot visitors will see the American experience begins with the American Indians who have always been here.”

“We are honored to collaborate with Walt Disney Imagineering and the Smithsonian in developing this exhibition,” said Della Warrior (Otoe-Missouria), director of the Museum of Indian Arts and Culture. “Hopefully, it will foster a greater understanding and appreciation of the various tribes located in almost every state in this nation, and people seeing these artifacts will be inspired and strive to learn more about American Indians.”

The dedication ceremony for “Creating Tradition” included a blessing from Seminole Tribe of Florida representative Bobby Henry and a stomp dance performance by Seminole tribe members.

During the next five years, the exhibition will feature new artifacts and refreshed displays, incorporating pieces from more of the 573 American Indian tribes recognized by the United States Bureau of Indian Affairs.