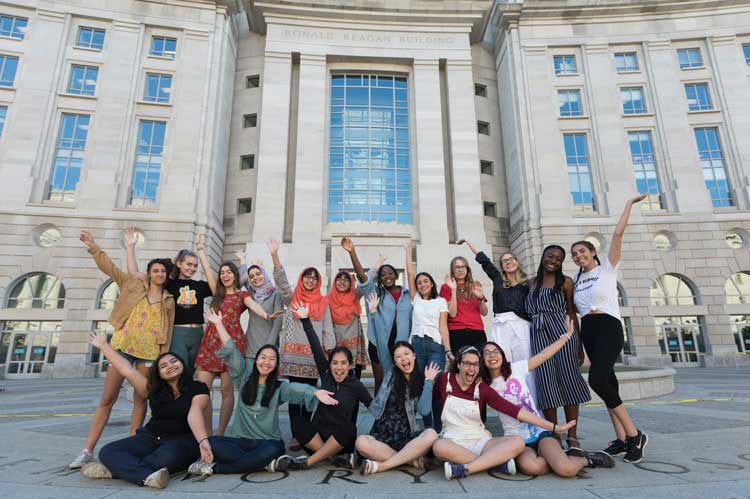 Jennifer Lee may have recently taken over the official role of Chief Creative Officer for Walt Disney Animation Studios, but she’s been inspiring filmmakers to follow in her footsteps for years. A new global project from Disney will give a hand up to 21 talented young women from around the globe by helping them make digital short films telling the stories of other inspiring female role models. The Dream Big, Princess series will then be shared across Disney’s global platforms to help raise $1 million as a donation for Girl Up, an initiative of the UN Foundation.

Each aspiring filmmaker will be paired with an inspirational interview subject spanning a diverse range of professions. The young women will capture the stories of these incredible individuals, along with their advice for achieving success. Academy Award Winner Jennifer Lee is just one of the talented women who will be featured in the series. In the video below she explains why this is an important outreach project for Disney.

“Using the journeys of characters like Anna, Elsa and Moana to inspire kids to dream big is at the very heart of what all of us at Disney do,” says Jennifer Lee, director/writer of “Disney’s Frozen” and CCO of Walt Disney Animation Studios. “The #DreamBigPrincess series is the perfect extension of that vision, providing a powerful platform for the next generation of aspiring filmmakers to create content about the women who have inspired them.”

Plans for the series were unveiled at the United Nations Foundation’s Girl Up Leadership Summit in Washington D.C., where the 21 participants took part in a unique workshop to give them the tools they can use to make their digital shorts. Each video will be shot on iPhone X and will be edited using Final Cut Pro X running on MacBook Pro. The aspiring filmmakers will also participate in a unique workshop including hands-on training from Apple technical experts, mentoring sessions with female-led production company Summerjax and creative inspiration from Disney storytelling veterans.

Following the workshop, the young women will embark on their own creative journeys back in their home countries with ongoing mentorship from Disney, Apple and Summerjax, before their videos debut across certain social media in October, helping drive an up to $1 million donation from Disney Worldwide Services to Girl Up.

“Each young #DreamBigPrincess director brings her own unique perspective and experience but what they all share is a passion for storytelling and making a difference in the world,” says Zenia Mucha, Senior Executive Vice President, Communications, The Walt Disney Company, “Our goal is to offer them the right mix of practical skills and creative inspiration to bring their vision to life.”

In addition to supporting young aspiring filmmakers and sharing inspiring stories around the world, the #DreamBigPrincess campaign aims to make a tangible difference for girls who face challenges in achieving their dreams. Through Disney’s collaboration with Girl Up, for each like or share of a video or photo with #DreamBigPrincess on Facebook, Instagram or Twitter, Disney Worldwide Services will donate US $1 to Girl Up, in support of girls’ leadership and empowerment (minimum donation: $500,000/maximum donation: $1 million). This charitable activation will kick off on October 10 and run until November 20, 2018. The collaboration exemplifies Disney’s efforts to provide inspiration and opportunity to kids around the world.

“The resources provided by Disney to empower girls and help them learn about the importance of storytelling will give them the confidence they need to achieve their own goals and advocate for others,” comments Girl Up Co- Executive Director, Melissa Kilby. “Last year’s donation from Disney has already allowed us to extend the network of Girl Up Clubs outside the US by more than 50 percent, representing a huge opportunity for thousands of girls to gain the leadership skills that will help achieve future goals.”

This year’s initiative builds on the success of the #DreamBigPrincess Global Photography series, which saw 19 female photographers from 15 countries capture inspiring stories of real world women and girls to encourage kids to reach for their goals. The precedent-setting campaign reached millions of families around the world unlocking a $1 million donation to Girl Up in less than five days. The images from the multi-award-winning campaign were also honored with an exhibition at the United Nations Headquarters in New York City.

It’s fantastic when Disney gets involved in programs like this. Not only does it help fill the ranks of talent that Disney might be able to draw from in the future, it’s for a great cause. I’m hoping these films will be available for viewing in the not too distant future.