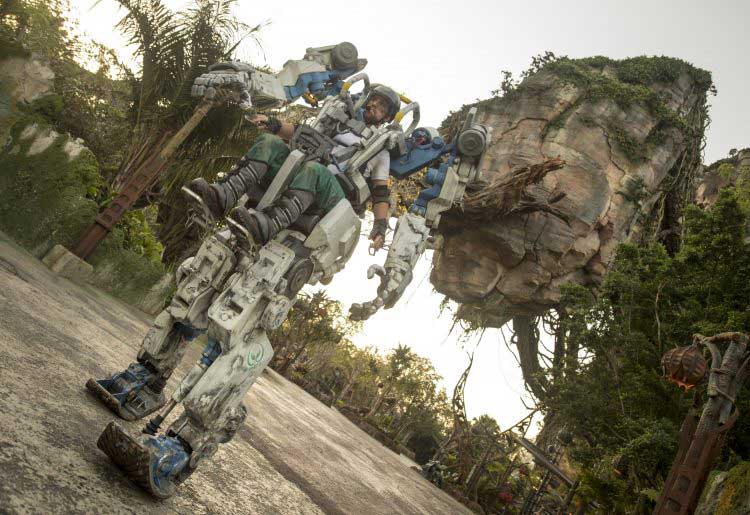 Pandora – The World of Avatar has added an otherworldly encounter for guests to encounter on their adventure – the new Pandora Utility Suit. This human powered suit helps demonstrate how technology is being used to restore the ecosystem on Pandora. The Pandora Utility Suit is inspired by the iconic Amplified Mobility Platform (AMP) suits of power armor from the epic film, “Avatar.”

Perched ten feet high, a human pilot straps into the cockpit of this exo-carrier and controls its powerful, yet agile movements. Designed for restoration, this suit will traverse the land daily while its pilot interacts with guests, sharing details about the land’s otherworldly landscape and highlighting the importance of preserving nature

The detail work on the utility mecha is pretty impressive. Look close and you may notice some claw marks and battle scars from a Thanator – an alpha predator on Pandora.

The suit was created for Disney’s Animal Kingdom via combined effort of Lightstorm Entertainment, Walt Disney Imagineering, and Michael Currey Studios. We spoke with Tony Giordano, Show Director for Disney Parks Entertainment, after having our own encounter with the mechanical suit.

You can now encounter the Utility Suit in a show twice daily in Pandora – The World of Avatar. Look to the times guide for show times and then head to the area outside Satu’li Canteen where the AMP suit currently stands silent guard to the climatic battle from the movie.