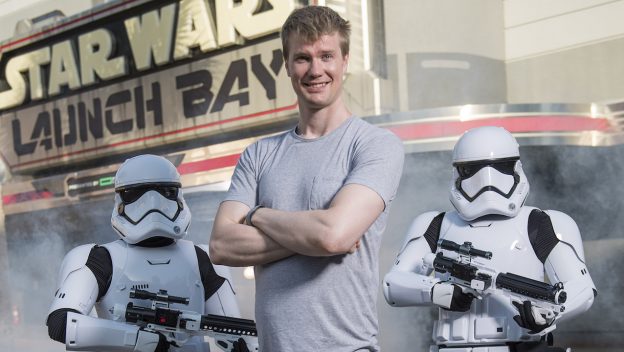 Actor Joonas Suotamo, who plays the Wookiee Chewbacca in Solo: A Star Wars Story, recently stopped by Disney’s Hollywood Studios to experience some of the park’s Star Wars offerings, including one of his favorites, the Star Tours – The Adventures Continue attraction.

The 6 ft 10in tall actor was on vacation with his family at Walt Disney World, but he’ll be back on May 27th as a featured guest in the next Star Wars: Galactic Nights event, which takes place two days after the opening of “Solo: A Star Wars Story.”

Joonas sounds pretty excited about the Star Wars offerings at Disney’s Hollywood Studios, along with his appearance in the Galactic Nights event. He’ll be the celebrity guest on a panel discussing the making of “Solo: A Star Wars Story” and his taking over the famous fur suit of Chewbacca full-time from Peter Mayhew, the original Chewie.

We also learned that Actor Ashley Eckstein (voice of Ahsoka Tano) will be at the event for an appearance. Ashley is known to Star Wars fans as the voice of Ahsoka Tano, but she’s also known as the person behind the company responsible for filling fandom’s closets and wardrobes with stylish apparel and accessories. Ashley will appear at the event in the Once Upon a Time gift shop with an assortment of her merchandise. She will also sign her new book, “IT’S YOUR UNIVERSE,” in which Ashley shares her life lessons, as well as lessons from iconic Disney characters, as a way to inspire girls to create big dreams and work to make them a reality. The book will be released May 8.

Note: A wristband is required to meet Ashley and will be distributed with purchase at the signing location on the day of the event. Merchandise available while supplies last.

Tickets are still available for Star Wars: Galactic Nights. The Star Wars themed event celebrates the entire Star Wars saga with out-of-this-world entertainment, special photo opportunities, exclusive event merchandise and food and a lot more. Chewbacca himself will be available for photo ops, although it won’t be Suotamo in the suit (or will it?). Who knows what surprises await?