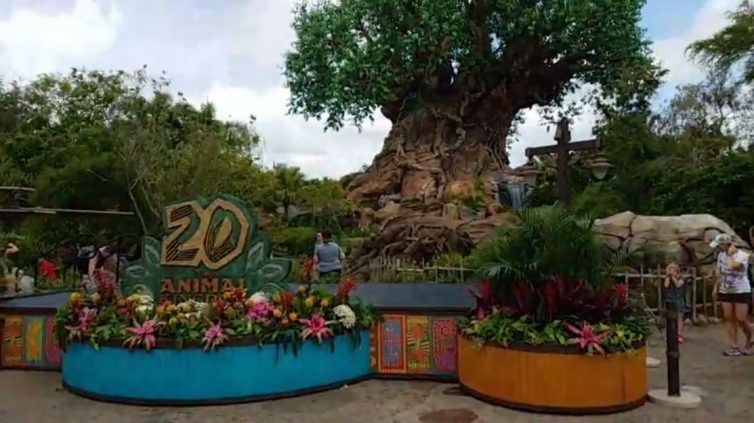 Yesterday Disney’s Animal Kingdom observed Earth Day which also happens to be the anniversary of the park’s official dedication in 1998. The last twenty years of magical adventures and unforgettable experiences would not have been possible without all the incredible cast members who work at the park. So before we go any further, we want to say thank you to each and every one of them.

Over 200 of the park’s opening day cast members still work at Disney’s Animal Kingdom and they were invited to a a pre-park photo, private reception, and to see the ceremony where Disney executives celebrated the park’s 20th anniversary. Here’s a photo of some of them with the 2018 Walt Disney World Ambassadors. 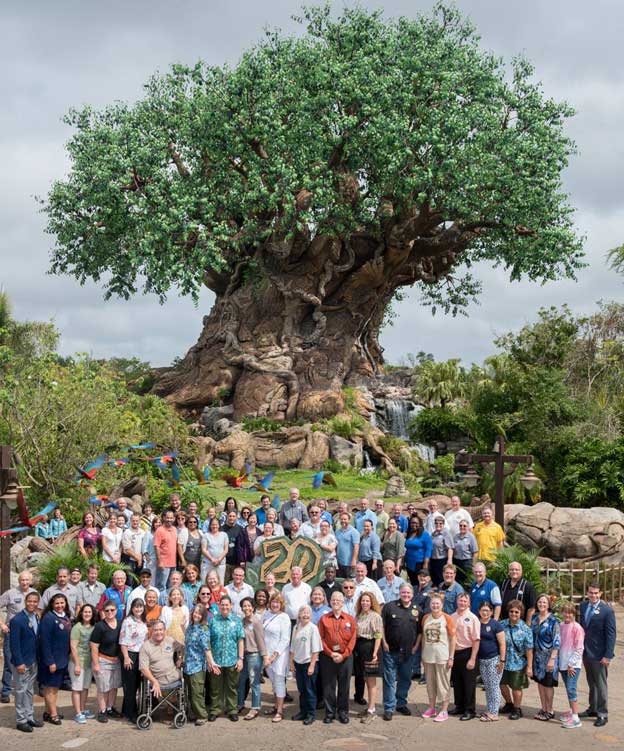 At the ceremony Joe Rohde, Creative Portfolio Executive for Walt Disney Imagineering, reflected on the park’s 20-year history. “We created this park out of a set of ideals that we believed were relevant and meaningful,” Rohde said, “and as the years have passed, those ideals have only become more relevant and more meaningful. Our lives are bound to the lives of all creatures.” 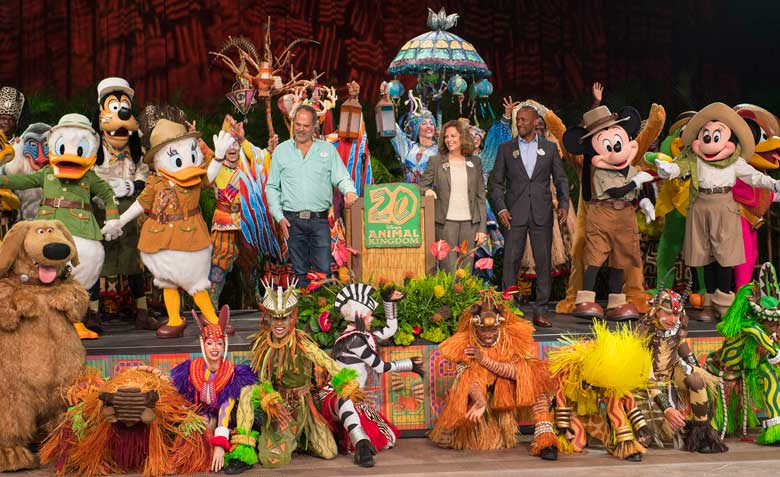 Djuan Rivers, vice president of Disney’s Animal Kingdom noted how the park has grown over the last two decades, and its profound impact on guests and conservation efforts around the world.

“Since 1998, we have been extremely conscious that what we have here is a new species of theme park,” said Rivers. “And while it has undergone an amazing transformation in the past few years, it will always be dedicated to helping our guests create a personal connection with the natural world.”

Rivers also called out the success of the Disney Conservation Fund, aimed at reversing the decline of imperiled creatures in the wild. To date, he said, the fund has directed more than $70 million to save wildlife, inspire action and protect the planet.

Of course, while we were there for the media event as part of the anniversary, there was an opportunity to walk around and see what was new. We recorded this video live while at Disney’s Animal Kingdom for its 20th Anniversary. We were able to find and highlight the new costumes that are being worn by general area cast members starting yesterday. They’re pretty cool.

Also note that we made it through the whole day without hearing the park’s #Nahtazu discarded marketing message. Disney is clearly proud of the park’s AZA membership.

More from the park’s 20th anniversary celebration and Earth Day later this week.

The celebration continues with a two-week long Party for the Planet celebration now through May 5. Keep an eye out for special photo opportunities, new Wilderness Explorers Badge locations, expanded experiences at Rafiki’s Planet Watch, and plenty of special food and merchandise items. Our favorites were the new Penny Press designs and the Impossible Burger at Nomad Lounge and Restaurantasaurus.

When is your next trip to Disney’s Animal Kingdom and what are you looking forward to seeing?