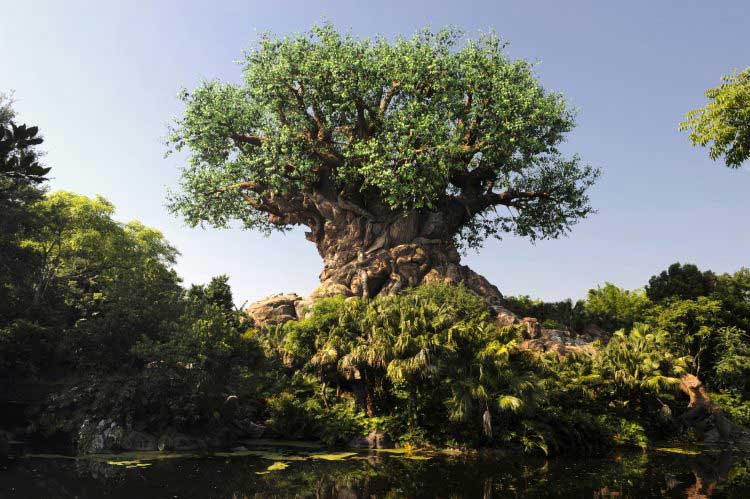 The genesis of Disney’s Animal Kingdom can be found in Walt Disney himself. Walt had a passion for nature and wildlife which was reflected in his choice of subjects for animation movies (such as Bambi) and in his first live-action film series (the True Life Adventures). So when Walt Disney Imagineers sought out a theme for the fourth gate at Walt Disney World, the theme of nature and its conservation made perfect sense.

“You’ve probably heard people talk about conservation. Well, conservation isn’t just the business of a few people. It’s a matter that concerns all of us,” said Walt Disney. “It’s a science whose principles are written in the oldest code in the world, the laws of nature. The natural resources of our vast continent are not inexhaustible. But if we will use our riches wisely, if we protect our wildlife and preserve our lakes and streams, these things will last us for generations to come.”

Joe Rohde, who is currently a Portfolio Creative Executive for Walt Disney Imagineering, was the lead Imagineer on the team that brought Disney’s Animal Kingdom to life.

“It’s kind of unusual to stay attached like this to a single project for two decades, but there you have it…Disney’s Animal Kingdom is more or less the story of my life,” said Rohde. “Even though it’s…like…twenty years old, there has never been a single day when we were not working on something that was going to go into the park or change the park. It’s a living thing, because it is full of other living things.”

“The super complex horticulture and landscaping of the park is part of what makes it alive.” continued Rohde. “It isn’t managed to stay the same, but rather to continue to grow and change…to be as real as we can make it be. You would not believe how much work that takes!

For the creation of Disney’s Animal Kingdom, Rohde and his staff consulted with many wildlife and conservation experts including the great Jane Goodall, founder – the Jane Goodall Institute and L&U Messenger of Peace. Goodall provided the following letter for the park’s 20th anniversary.

“I have been involved with Disney’s Animal Kingdom since before the grand opening day 1998. From the start I was impressed by the scale of the park – it was especially magical to see four elephants able to disport themselves in a huge pool. How lucky I was to be allowed to climb the scaffolding and look close up at the amazing art work on the Tree of Life. The huge sculpture of David Greybeard, the only named animal on the Tree, was a surprise, sculpted specially for me.

The Disney Conservation Fund was established to support conservation efforts in many countries, including educational programs. I am particularly grateful that hundreds of young people in Jane Goodall’s Roots & Shoots have benefited from this fund in eighteen countries around the world. It is so desperately important that the next generations should be better stewards of the natural world than we have been.

Visitors to Disney’s Animal Kingdom learn to respect animals as individuals. They also come away understanding that each one of us makes an impact on Planet Earth every day. By choosing wisely, choosing to tread lightly on the Earth and thus conserve our precious and finite natural resources, we can ensure a better future for generations of people and animals to come.”

Of course Disney has its own internal team of experts. Doctors Anne Savage and Mark Penning have been with the animal care program at Disney’s Animal Kingdom since even before the park opened.

“For the past 20 years, Disney’s Animal Kingdom has worked to help save wildlife and engage communities in helping protect the magic of nature,” said Anne Savage, Ph.D, Conservation Director, Disney’s Animal Programs. “I’m so excited to see these care and conservation efforts continue to grow through the Disney Conservation Fund and our dedicated cast.”

“We are proud to contribute to Walt Disney’s legacy of caring for wildlife and wild places,” said Dr. Mark Penning, Vice President, Animals, Science and Environment. “As a world-class leader in animal care and conservation, we are leading the way and reversing the decline of endangered and imperiled species. Through our participation in Species Survival Plans, we’ve been able to responsibly breed more than 200 species, thus ensuring diverse animal populations for the future.”

Today Disney’s Animal Kingdom is led by Vice President Djuan Rivers. “Disney’s Animal Kingdom has undergone an amazing transformation in the past few years, but at its heart, it has always been dedicated to helping our guests create a personal connection with the world around us,” said Rivers. “As we approach this 20th anniversary milestone, I’m honored to have been entrusted with leadership of this unique park and to work with this incredible group of Cast Members who share the magic of nature with our guests every day.”

“Disney’s Animal Kingdom has seen a lot of change, and through all the amazing accomplishments, we have remained committed to bringing the magic of nature to our guests in ways only Disney can,” continued Rivers.

With a park like Disney’s Animal Kingdom putting the message of conservation of nature in front of millions a guests each year, Disney has a grand opportunity to entertain and inform for well beyond another 20, 30, 50 years.