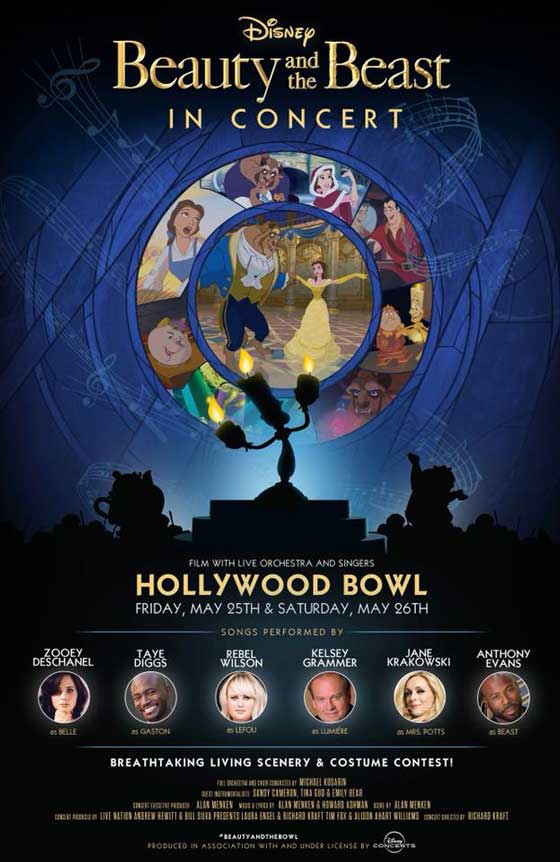 A special live concert performance of the animated classic Disney’s Beauty and the Beast will be performed at the world famous Hollywood Bowl on May 25 and 26. Zooey Deschanel, Kelsey Grammer, Taye Diggs, Rebel Wilson, Jane Krakowski, and Anthony Evans headline an all-star cast of performers singing the songs from the Oscar and Grammy-winning score as the film plays on the Bowl’s movie screen accompanied by a full live orchestra.

The singing cast includes Zooey Deschanel as Belle, Kelsey Grammer performing “Be Our Guest” as Lumiere, Taye Diggs singing as Gaston, Rebel Wilson singing the role of LeFou, Jane Krakowski performing the title song as Mrs. Potts, and Anthony Evans as Beast singing “Evermore” written for the live-action version of the film.

We’re going to say on the whole this is a great casting. We can’t wait to hear Taye Diggs as Gaston and we know Rebel Wilson will chew up the role of LeFou. Deschanel, Grammer, and Krakowski are all known for great singing chops. So we’re pretty excited even if the casting is initially a bit off.

Enhancing the evening will be breathtaking living scenery projected onto the façade of the iconic Hollywood Bowl, making the event more immersive. This special family event will also include a costume contest, unique photo opportunities, and other surprises.

“Performing ‘Beauty and the Beast,’ one of my favorite movies growing up, in a special concert at the legendary Hollywood Bowl is a dream come true,” said Zooey Deschanel. “I am looking forward to what I’m sure will be a magical event.”

“I love this film, I love Alan Menken and I loved Jerry Orbach—the title song, as sung by Angela Lansbury, makes me cry to this day,” said Kelsey Grammer. “Walking in the footsteps of such a brilliant cast is an honor; and as for singing the music of the incomparable Alan Menken—it goes without saying.”

“I’ve been a fan of ‘Beauty and the Beast’ both as a parent as well as a Disney animation supporter,” said Taye Diggs. “I’ve seen the Broadway production more than once and have harbored jealousy of every actor who has ever played Gaston every time I’ve been in that theater. I’m giddy with excitement at the opportunity to finally sing the role. To be able to do this while staying in LA and at the famed Hollywood Bowl only sweetens the pot. I’m hyped and oh so grateful.”

“I’m so stoked to be playing the role of LeFou for Disney’s Beauty and the Beast in Concert at the Hollywood Bowl this May,” said Rebel Wilson. “I’m hugely looking forward to meeting Taye and the rest of the cast and to meeting all you lucky folks who get to come to this special live event! Anywhere where you can bring a picnic AND be incredibly entertained is a superb night out. Until then I will be mentally preparing for the role in France by eating croissants.”

“This cast is nothing less than enchanting,” said concert director Richard Kraft, who previously helmed live-to-film events at the Hollywood Bowl such as Disney’s “The Little Mermaid,” “La La Land,” and “Willy Wonka and the Chocolate Factory.”

Kraft explains, “Like our celebration of Disney’s The Little Mermaid in Concert at the Hollywood Bowl, we are mixing film, live music, singers, dancers, digital projections, effects, and special guest artists to create an event that pays homage to the original movie but also delivers something that can only be experienced live. Our creative mantra for this show has been: ‘We want our audience to be our guests. We have filled up the event course by course, one by one, ’til they shout, enough I’m done!’ ”

“The Little Mermaid at the Hollywood Bowl was an amazing and unforgettable event,” said Alan Menken. “Now ‘Beauty and the Beast’ at the Bowl is coming, with an extraordinary cast and a world class orchestra. I am beyond excited to be a part of what will be another fantastic evening.”

Conductor Michael Kosarin will be leading the full orchestra and choir performing the film’s classic score and songs live to picture, including beloved musical numbers “Be Our Guest,” “Gaston,” and “Belle.”

Music supervisors for the show are Julia Michels & Julianne Jordan. Choreography is by Mark “Swany” Swanhart. Robert J. Ulrich, Carol Kritzer, and Alex Newman are the casting directors. Scenic design is by DeAnne Millais, with wardrobe by Linda Muggeridge.

The concert is produced by Laura Engel & Richard Kraft, Tim Fox & Alison Ahart Williams, and Live Nation/Andrew Hewitt & Bill Silva Presents, in association with Disney Concerts, the team that presented the 2016 highly-acclaimed Disney’s The Little Mermaid in Concert at the Hollywood Bowl, starring Sara Bareilles and Rebel Wilson, as well as Disney’s The Nightmare Before Christmas in Concert at the Hollywood Bowl, starring Danny Elfman and Catherine O’Hara. Eight-time Oscar-winning composer Alan Menken is executive producing the event.

Doors will open at 6:45 PM with a costume contest to follow and the concert beginning at 8:15 PM.

Tickets Go On Sale Friday, March 16 At 10:00AM PT at TicketMaster.com