This morning Disney and Google are launching new Street View images of 11 favorite Disney theme and water parks in California and Florida. This feature of Google Maps has been around in various forms for a few years (Google Earth included), but this is a nice expansion with some new areas recently added to the parks like Pandora at Disney’s Animal Kingdom and Guardians of the Galaxy at Disney California Adventure. Now, whenever you want relive a little of Disney theme park magic, just dial up Google Maps and away you go. 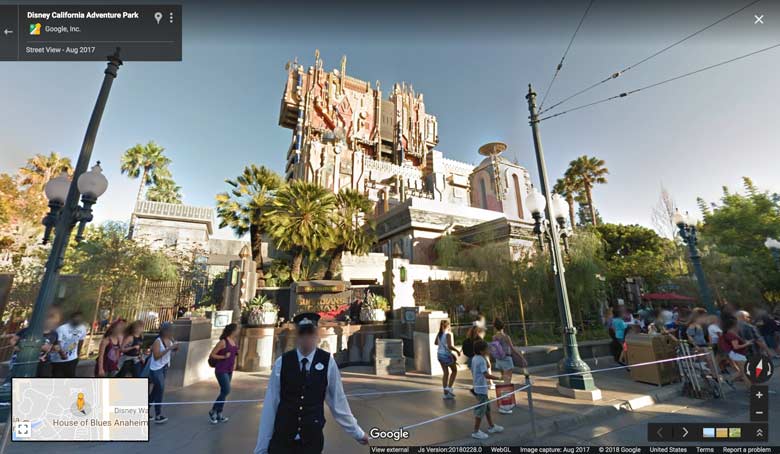 “We’re all about new fantastic points of view. Today Street View is going the distance, from California to Florida, to make Disney part of your world,” said Deanna Yick, Program Manager Google Street View. “Be our guest at 11 Disney Parks, and with Street View, anything your heart desires will come to you—castles, rides, attractions to infinity and beyond.”

Here’s a quick hyperlapse video provided by Google that strings all the new locations into one quick trip:

To access the new Street View imagery simply search for one of the 11 Disney parks, and once you’ve zoomed in on the area, drag the yellow pegman icon on the lower right corner of your map screen onto an area that becomes highlighted in blue. From there, you’ll be able to pan around and check out the imagery in 360-degrees.

We’ve provided some shortcuts for you here:

According to Google, in the new Google Maps, you can also access street-level imagery through the carousel at the bottom of the screen that gathers all Google Maps imagery in one spot. Simply searching for the local destinations and then clicking the icon in the lower right corner will open the carousel and let you surf through the different imagery types, including Street View.

Are you like me and know you’ll be spending countless hours roaming Disney’s theme parks via the virtual wonder that is Google Street View?