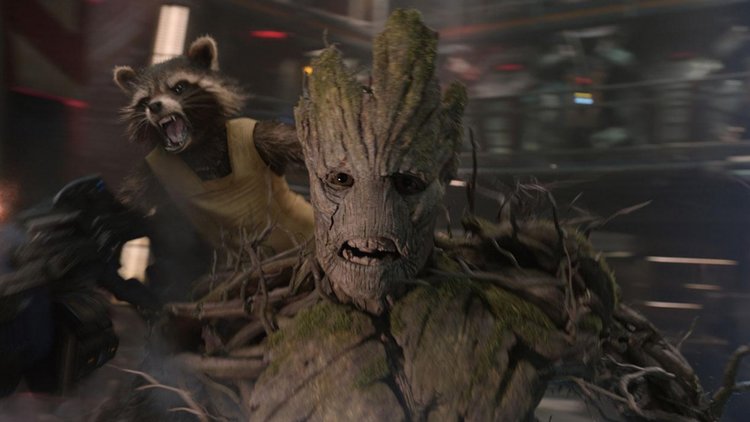 If you remember the end of Guardians of the Galaxy, the giant walking tree-like creature Groot sacrifices himself to save his friends as they plunge to the planet’s surface in the villain’s ship. The plan works, but leaves Rocket Raccoon distraught at the loss of his friend. However, during the end credits we learn that Groot lives on as a dancing cutting planted in a pot. All is well.

In Guardians of the Galaxy Vol. 2, baby Groot, free of his pot, steals the show with his tiny cuteness. Later in the movie he saves his friends again, after a little confusion:

However, in a series of of social media posts interacting with fans of his movies, Director James Gunn revealed that the cute little creature you thought was Groot, is really his son. Groot is dead.

According to Gunn, the plotline was not specified in the film, but Rocket planted a part of Groots’ destroyed body to grow Baby Groot. So Baby Groot is like a cutting. The Groot we knew from the first film is gone, Baby Groot is born from his body, but is not Groot.

It turns out Grunn has had to address this before. He wrote in a Facebook post last year:

“I also mentioned to folks who… kept throwing the Groot revival in my face, that that example doesn’t really work because Groot is dead,” Gunn stated on Facebook. “Although I don’t necessarily think it’s obvious in Vol. 1, it’s important to say that if you exploded and a little glob of you started growing into a baby, I would not assume that baby was you.”

As we saw in the end credits scene in Guardians of the Galaxy Vol. 2, adolescent Groot will appear in “Avengers: Infinity War” when the film flies into theaters on May 4.