The Disneyland Resort is going Pixar crazy and we can’t wait. From a re-themed Pixar Pier featuring an Incredibles themed roller coaster to the first ever Pixar Fest at the resort, guests will enjoy all-things Pixar all summer long.

This year, experience the wit, humor and warmth of Pixar stories and characters in extraordinary new ways at the Disneyland Resort, beginning with the first-ever Pixar Fest, a limited-time celebration of friendship that begins April 13.

Disney California Adventure will open the highly anticipated Pixar Pier on June 23, 2018, powering up summer with more of the playful Pixar stories and characters that guests have come to know and love including the new Incredicoaster, a thrilling adventure with everyone’s favorite Super family and theming inspired by the newest Pixar film, “Incredibles 2.” Also debuting in June, a new float adds superhero fun to the electrifying “Paint the Night” parade, featuring characters from Pixar’s “The Incredibles.”

Paint the Night moves to DCA 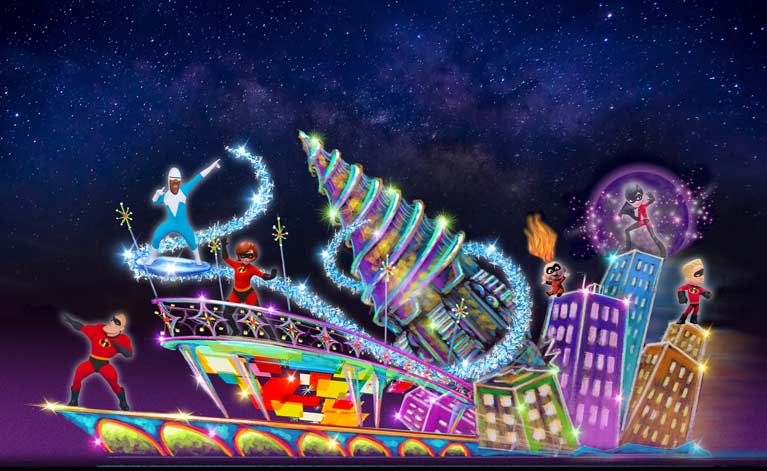 The fan-favorite “Paint the Night” parade returns April 13 for Pixar Fest, this time at Disney California Adventure. And in June, the popular nighttime spectacular adds even more Pixar fun with the addition of a new, high-energy float inspired by “The Incredibles.” Mr. Incredible, Elastigirl and Frozone will showcase their superhero awesomeness as they take on their newest threat, the Underminer. Violet, Dash and Jack-Jack also showcase their unique powers in surprising new ways, as shown through dynamic and innovative visual technology.

Like the other elements in this spectacular parade, this new float will come to life through a series of dazzling LED lights, new music elements and high-tech, pop-art effects inspired by the mid-century-modern style of the films. 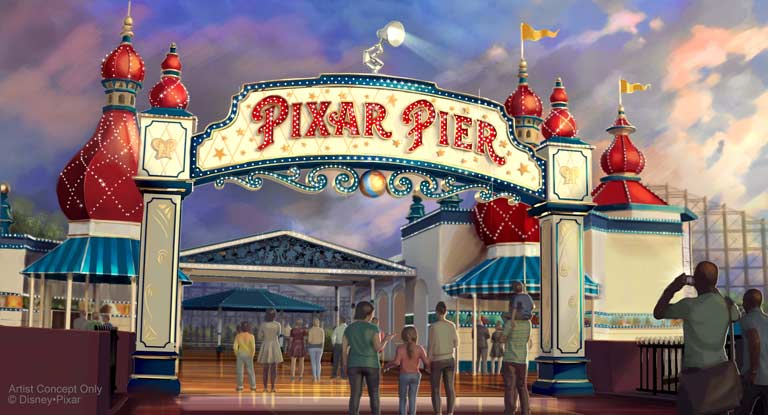 The thrilling new Incredicoaster will anchor Pixar Pier in the new land’s first neighborhood, which is inspired by “The Incredibles.” New character moments, scenes, special effects and an exciting musical score will connect the attraction’s story to “Incredibles 2,” which opens in theaters June 15, 2018. A second neighborhood at Pixar Pier will be inspired by “Toy Story” around the popular Toy Story Mania! attraction. The third new neighborhood will be inspired by “Inside Out” and will feature an “Inside Out” attraction, scheduled to open at a later date. The fourth new neighborhood will celebrate a collection of Pixar stories. Mickey’s Fun Wheel will transform into a newly-themed Pixar attraction, allowing guests to enjoy the beautiful sights of Pixar Pier from 24 new gondolas that will feature beloved Pixar pals. The midway games will also be inspired by Pixar characters, including favorites from “A Bug’s Life,” “La Luna” and “WALL·E”.

Additionally, what was formerly Ariel’s Grotto restaurant and the Cove Bar will be transformed into a Pixar-themed lounge, offering sparkling views of Paradise Bay and the new Pixar Pier.

Pixar Fest will allow guests to celebrate friendship and beyond during this limited-time event, bringing Pixar stories and characters to life like never before. At Disneyland, a new fireworks show, “Together Forever – A Pixar Nighttime Spectacular,” will debut with dazzling pyrotechnics, memorable music and a heartwarming story.

“Pixar Play Parade” returns, this time making its way through Disneyland park. The popular parade will bring even more fan-favorite Pixar stories to guests with the addition of three new show elements, including the famous Pixar Lamp and Ball from the Pixar short film, “Luxo Jr.” as well as characters and elements from “Up” and “Inside Out.”

And appearing for the first time at Disney California Adventure, the “Paint the Night” parade will return to delight guests with the parade’s 1.5 million, brilliant LED lights and catchy tunes. In addition to the new Incredibles-themed float, “Paint the Night” parade will spotlight many Pixar stories and include characters from “Toy Story,” “Monsters, Inc.” and “Cars.”

A new film festival, Pixar Shorts, will also take place throughout much of Pixar Fest at Disney California Adventure. Pixar Shorts will feature rotating favorites including “For the Birds” and “LAVA” at the Sunset Showcase Theater in Hollywood Land.

And in the Paradise Gardens area at Disney California Adventure, many new Pixar experiences will be available for guests to enjoy including performances by a new Pixar-themed musical troupe, Pixar character encounters, and special crafts and activities for younger guests.

All of these exciting new additions for the limited-time Pixar Fest celebration and the opening of the new land of Pixar Pier will add to the existing Pixar attractions and entertainment currently available throughout the Resort, from Buzz Lightyear Astro Blasters at Disneyland to Cars Land at Disney California Adventure.

Yes, we waited a long time for Disney to give Pixar a bigger role in its parks. Now that we have Pixar Pier and Pixar Fest the question is which will you enjoy the most?