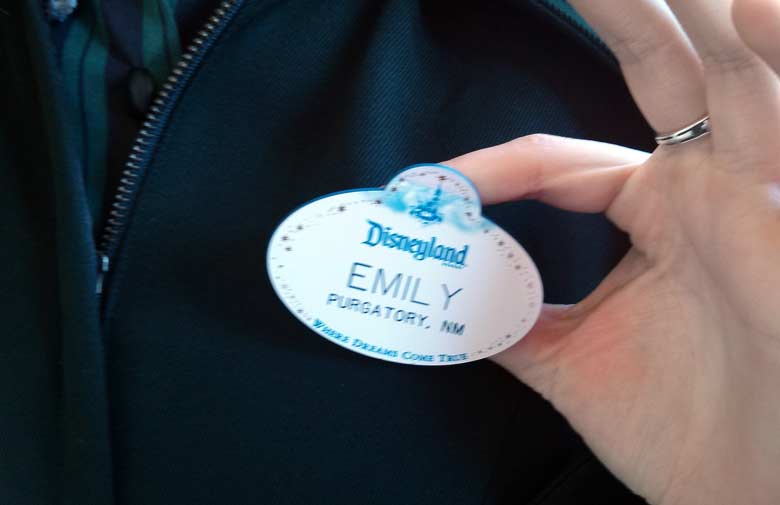 When Disneyland opened in 1955 each of the parks 600 employees was given a badge to wear in the park to identify them as employees to guests. The badges have the familiar shape that we know today, but no name. Instead they were metal pieces emblazoned with the world ‘Disneyland’ and the employee’s unique number. If they remind you a bit of a sheriff badge, it’s because Disney hired the same company that made LA police and California Highway Patrol badges to produce them.

Walt Disney himself did not wear a badge because, well, everyone knew who he was. Park supervisors were given badges with first and last names instead of numbers.

Names weren’t actually regularly added to the badges until 1962 when Disneyland began to produce plastic name tags with a new company. The next few years were a transition but by the opening of New Tomorrowland in 1967 all employees were wearing the new style name badges.

These days cast member name badges are ubiquitous with over 100,000 being produced a year, at Walt Disney World alone. A new behind-the-scenes video looks at how they’re produced today and their meaning to cast members who are ‘earning their ears.’

For those of us born after Disneyland opened, it’s easy to feel like the parks just sprung into existance as we first visited them, but like all companies they evolved their own unique culture over time.

What is your favorite Disney theme park tradition?