We are continuing our Marvel retrospective with a look at the second film in the franchise – The Incredible Hulk. Let’s be honest, it’s really hard to make a movie about the Hulk. Think about it, the main character, the one we’re supposed to be rooting for, is trying to prevent the other thing we’re rooting for. We want Bruce to find an antidote for his problem, but we also want to watch the Hulk break Harlem.

First off, kudos to Marvel for not doing another origin movie since it had only been five years since Ang Lee’s, Hulk. 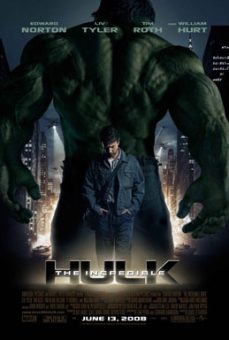 The Incredible Hulk is the red-headed stepchild of the Marvel Cinematic Universe for a number of reasons. The character is owned by Universal which means they got a say in the making of the film (and a share of the profits). It’s also the one MCU movie that wasn’t distributed by Paramount or Disney.

As such the movie is the least connected to the rest of the MCU. The story doesn’t connect to any other MCU movie in any direct way and is only referenced in passing (like the aforementioned “breaking Harlem”) if at all. Weakening the connection even more is the face that they recast Bruce Banner which resulted in, up until 2016, not seeing a single actor from that movie in the MCU again (Note: this is not a criticism of Mark Ruffalo’s portrayal of Banner/Hulk, just an observation of facts).

In order to appreciate this movie the most, you need to see it as a love letter to the 1970’s TV show starring Bill Bixby and Lou Ferrigno. Not only do both Bixby and Ferrigno make cameos in the film (Bixby on Bruce’s TV at the beginning of the movie and Ferrigno as a security guard and the voice of the Hulk) but they even play the Lonely Man music that famously played at the end of each episode.

One of the more obscure Easter Eggs in the films happens right after the Hulk rampages across a college campus. In the aftermath, two students are being interviewed by a TV reporter, one of whom is identified as Jack McGee. In the 70’s show, McGee was a tabloid reporter who was always on the Hulk’s trail.

Ultimately, this movie is at times entertaining, but mostly lackluster, unless you’re a fan of the old show.