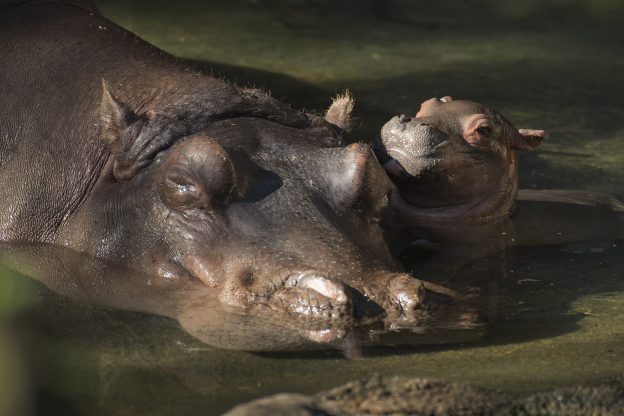 It was a big day in the hippo pool at Disney’s Animal Kingdom on late Saturday night. A Nile hippopotamus was born and joined the park’s hippo bloat, or pod. This was the first hippo born in the park in 13 years. We don’t know why baby hippos are so cute, but they are!

Disney’s animal care team has the mom, Tuma, and the calf under observation while the two nurse and bond. Because they won’t be approaching the pair unless there’s a real need, the calf’s gender and weight may not be known for some time.

Update: We now have video of the young calf out in Kilimanjaro Safaris with its mom.

As a member of Association of Zoos and Aquariums Disney participates in the Species Survival Plan for the Nile hippopotamus. The species is listed as threatened and vulnerable, and the Nile hippo subspecies is extinct in its native territory, so every birth is important.

The entire team of animal care specialists deserve a big congratulations for this important contribution to the protection of the species.

Guests may be able to see Tuma and her calf on Kilimanjaro Safaris or on the Walt Africa Trek experience. We hope Disney will share some video soon.