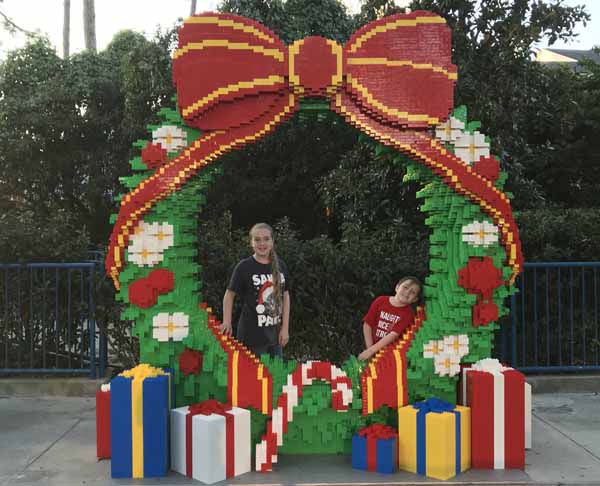 We were invited to bring our family and attend LEGOLAND Florida for this year’s Christmas Bricktacular. I loved all the Christmas decorations made out of LEGO bricks. It wasn’t surprising but the execution was spot on. LEGOLAND continues to deliver a holiday experience that’s unique to Central Florida.

Once we got into the park and got a map and event guide we tried to make our plan of attack. Here are the highlights of our Christmas Bricktacular day.

11:30 North Pole Nonsense – This was a live mini show where elves Roger and Marvin are figuring out where is their place to help out Santa; wrapping, sleigh repair, and other fun stuff like making sure they have the magic to fit through small spaces such as a tennis racket. They practice their balancing and juggling skills. This show has lots of slapstick (and even a couple of fanny whacks and one elf getting hit in his jingle bells) that the kiddos thought was hilarious. Cute way to start the day. Whole thing lasted about 15 minutes.

12:00 LEGO Santa barely any line. Not only did the kiddos get their picture taken, LEGO Santa took time for a selfie with me. We were out of there so fast we decided to see if we could catch some of Storytime with Mrs. Claus. 12:00 Storytime with Mrs. Clause and Letters to Santa over in Duplo Valley. This was a nice mellow time but still interactive. Many adult and children audience members were picked to act out a Christmas themed story of a letter’s adventure on it’s way to Santa. The daddies as Santa’s reindeer was the best! Not only were they great sports, but their little munchkins were over whelmed with the Christmas joy and had to run up to hug their reindeer daddies. After story-time, Mrs. Claus poses for pictures and encouraged kids to write their letters to Santa where they could mail right there. I personally LOVED that Mrs. Claus’ apron had a cut pattern on it made of legos. Nice touch! While in Duplo Valley, we took advantage of the Sleigh & Reindeer photo op.

12:30 Meet LEGO Toy Solder. We did all that and still made it in time. Actually, I was kinda surprised that we were the only ones in line. This wrapped up all the items with a scheduled time ~WHEW~ Over in Miniland was one of our favorite events of the day, Holidays Around the World Mosaic. Guests were given a small square LEGO flat they they were to cover with LEGO singles that coordinate with the pattern on top. Once completed, you turned it in and the square was added to a much larger Lego flat. It was clear that these would become some sort of picture once all together. It was fun to come back and visit this throughout the day to see the picture develop. 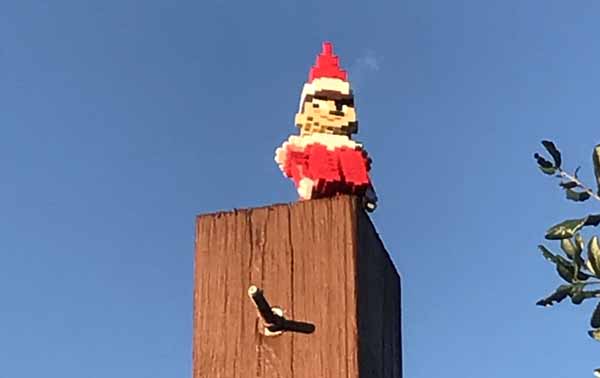 Also in Miniland is where the Santa’s Helper Scavenger Hunt is listed. This was deceiving for two reasons. First, the scavenger hunt is actually throughout the park. Second, and more frustrating, You are actually supposed to get the scavenger hunt paper from the Studio Store, but is not listed anywhere on the event guide. Had we done this, we would have saved a lot of steps. Oh well. The kids still had fun searching the park for these LEGO elves. Once we found all them and filled out our from we were able to turn it in for some cute Christmas Bricktacular buttons. The Build and Buy Lego Christmas ornament really should have been called the Buy and Build Christmas ornament. Located inside the Lego factory experience, you would expect there to be some sort of table set up for this event. After looking and looking, we finally asked the cashier. Turns out you purchase the ornament first and then are handed a blind packet and a set of printed out instructions. This is a Lego Christmas tree that then goes inside of a sphere ball to be hung on your tree at home. Although adorable, this is not what I would consider an “event” since you took it to go.

Christmas Tree Spectacular truly was spectacular but only after the sun has gone down. The shows were every 20 minutes starting at 5:15 PM. We went to the very first showing and I was not exactly impressed since the sun was still out. However when it started snow, we did a little bit of shopping and then decided to come back for the last showing of the day. The sun was down and the lights and music were paired perfectly making an amazing show. When it started “snowing”, the magic of Christmas surely was in the air for all the children. 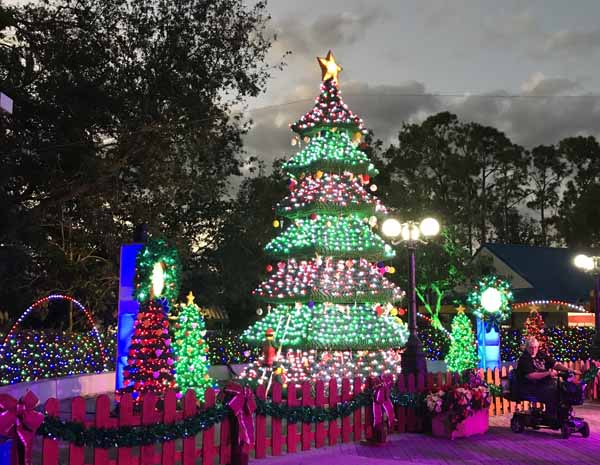 We left with not only sore feet but the excitement of Christmas in our hearts.