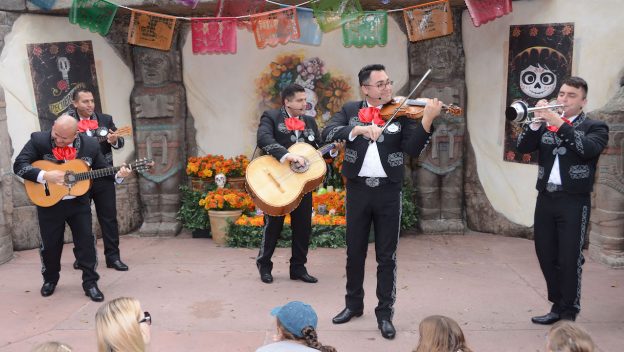 The magic and music of Pixar’s new animated hit “Coco” can now be found at the Mexico Pavilion in EPCOT. Now through January 6, 2018, a new musical group, “El Mariachi Coco de Santa Cecilia,” will entertain guests. The group takes its name from the town of Santa Cecilia in the film and will perform songs from the movie including the touching “Remember Me” and the rousing “The World Es Mi Familia.”

As we mentioned in our review of “Coco,” the world of Miguel revolves around music, even if his family has abandoned it. The story of how Miguel and his family come together during the celebration of Dia de los Muertos is told as only Pixar can.

You can also head inside the pavilion and enjoy an exhibit showcasing artwork from the “Dia De Muertos” holiday. Later this winter, this exhibit will be switched over to include scenes from the movie and an interactive exhibit.

There have been rumors that the pavilion’s main attraction “Gran Fiesta Tour Starring The Three Caballeros” will get a new “Coco” theme if the movie is a big hit. I’m not sure how much faith I put in that rumor with all the other big projects planned for EPCOT in the near future. However, I wouldn’t be too upset as long as they preserve the Three Caballeros animatronic figures somewhere.

It’s also the EPCOT International Festival of the Holidays, which means the pavilion is celebrating “Las Posadas” with colorful dancers and performers from Mariachi Cobre celebrating the holiday customs of Mexico.

If you go, be sure to have some Tamale for me.