Even before moving to Los Angeles in the early 1990’s, I’ve been fascinated with the folklore behind the Mexican holiday of “Dia de los Muertos” to the point of preferring it over Halloween. The holiday that honors dead ancestors and friends has been fertile ground for the imaginations of the talented storytellers at Pixar Animation Studios in their new movie “Coco.”

Co-directed by Lee Unkrich and Adrian Molina, “Coco” is a return to form for Pixar evoking other touching family stories like “Inside Out” or “Ratatouille.” The focus on the strength of family bonds over time with ties to the rich Mexican folklore gives the audience access to a heritage they may not have previously been exposed to.

The story follows Miguel a 12-year-old boy who belongs to a family of shoemakers, but who yearns to be a famous musician like his idol, Ernesto de la Cruz, who died years ago, but lives on via scratchy records and old movies. The problem is Miguel’s great-great-grandfather left his family in search of his own music career and never returned. Since then the family had lived without music.

In a King Arthur moment, Miguel pulls the proverbial sword from the stone when he grabs a guitar out of his idol’s tomb to play in talent show, but instead he ends up in the lead of the dead where he meets his ancestors and sets off on a journey to return to the land of the living. 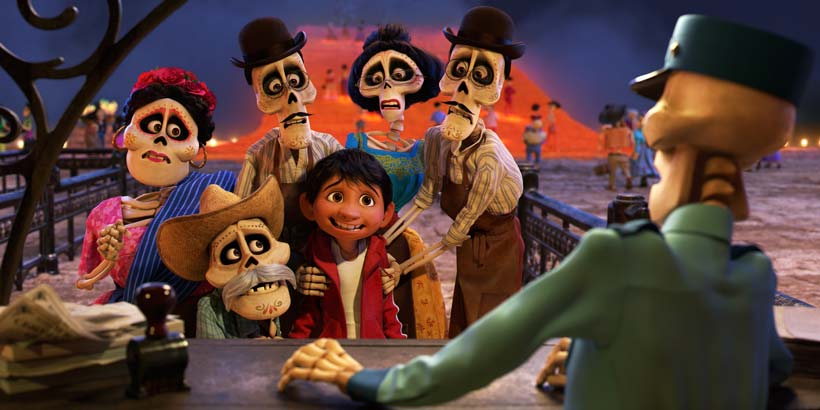 While there was early controversy about Pixar co-opting Mexican culture for their film when the company first started working on this idea. But thanks to a strong cultural advisory panel all those objections have been overcome. What’s left is something that feels authentic and beautiful.

From ubiquitous Marigold petals (important to the Dia de los Muertos holiday) to the family’s alter with offerings to those who have passed beyond and even to the food that’s plentiful in the film (and stands in for success), the attention to detail by Pixar honors the Mexican family and folklore rather than exploits it.

The design elements of the Land of the Dead is evocative of a world that has to get by on the rejects of the world of the living while still possessing it’s own inner beauty. According to filmmakers, they took inspiration from Mesoamerican pyramids, Mexico City’s ancient history, and the idea of a coral reef with layers of history growing up and out over time.”

Pixar’s “Coco” would not be what it is without the musical landscape. Composer Michael Giacchino returns to Pixar and delivers a score that soars at all the right moments and almost vanishes at other times.

“We wanted the score to feel like it was born out of the world,” said Giacchino. “That meant making sure that we were using indigenous instruments and pushing for authenticity in every way.”

You can see a whole variety of music in this quick clip from the movie:

The film revolves around on key song, “Remember Me,” which is written by Disney’s song writing superstars Kristen Anderson-Lopez and Robert Lopez.

“The song is from the point of view of a person hoping to be remembered by a loved one,” said Anderson-Lopez. “But the lyric can be interpreted a few different ways depending on the tempo and tone of the music.”

My chief complaint about “Coco” is that it follows a very formulaic plot. That said, the journey is still very enjoyable even if I predicted it 10 minutes into the film. I also found it unbelievable that a family of cobblers would be able to live for three generations without music in their lives. Even in the movie, all Miguel has to do is turn the corner and a band is playing a song. Avoiding that would have been nearly impossible.

I loved the presence of the Alebrijes in the film. The spirit guides look like pets in the real world but are bright and colorful figures in the land of the dead. You may have seen the toy version of them inside the Mexico pavilion at EPCOT. Once the film moved over the Marigold bridge to the land of the dead, it becomes a visual treat that matches anything Pixar has created in the past.

“Coco” is film about and for families as only Pixar can produce. The story of Miguel and his family is a wonderful entry point into the two worlds of the living and the dead. Through the portal of tradition, the filmmakers explore our own need to be remembered, honor our past, while still forging our own paths. The film is an emotional authentic experience. I predict a whole lot of beginner guitars will be sold this holiday season.

Disney’s “Olaf’s Frozen Adventure” will be paired with “Coco” at the Box Office for a limited time. However, the animated short from Walt Disney Animation Studios was not screened with our viewing of “Coco,” therefore we cannot offer a review at this time.

Pixar’s “Coco” is now playing at theaters in the U.S. and Canada.