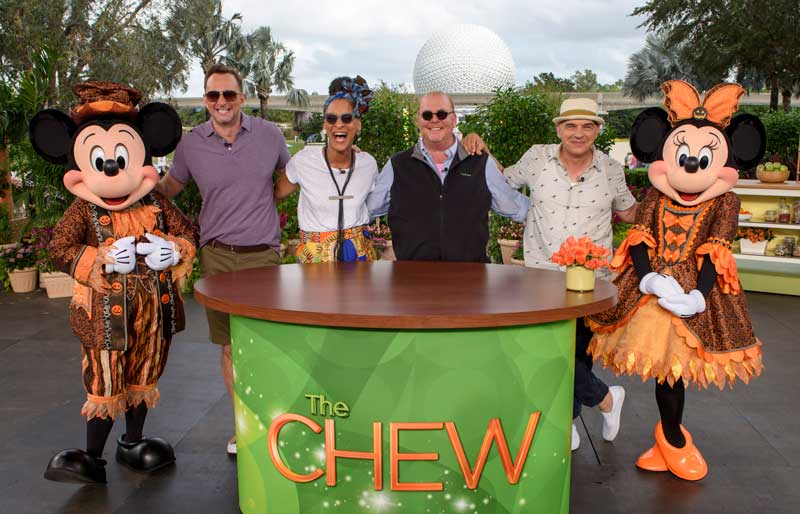 This year the Walt Disney Company will make a $1 million contribution to Feeding America, an organization that helps food banks expand their local fresh produce and distribution programs to better serve kids and families who need it most. This time of year can be difficult for families who struggle to make ends meet and having food on the table can make the difference between success at school for millions of kids.

The announcement was made on ABC’s “The Chew” today and kicked off Disney’s “Share the Joy” campaign, inspiring families around the world to help others and make a positive impact in their community during the holidays. The program will help 60 food banks throughout the country better serve their communities.

This year, as part of Disney’s “Share the Joy” campaign, Feeding America and Disney will expand access to healthy living options in neighborhoods where kids and families live, work and play. Increasing access to nutritious foods is part of Disney’s long-standing commitment to create healthier generations. Disney|ABC Television Group will also inspire audiences to donate nutritious foods through Feeding America with a series of Public Service Announcements (PSAs) that will run on ABC, Freeform, Disney Channel and Disney XD through December. Additionally, ABC-owned television stations in local markets will host volunteer events with local food banks.

During “The Chew” segment, Kids Cafe, a child nutrition program of the Houston Food Bank, was featured along with some volunteers. Carla Hall and Chew Super Fan Rhonda Russell (Houston, TX) help to give back to the community in the aftermath of Hurricane Harvey with a visit to the food bank. The Houston Food Bank was one of several Feeding America food banks directly impacted by hurricanes that made landfall earlier this year. To support Feeding America and the food banks’ disaster relief efforts, Disney made an additional donation of $500,000 earlier this year.

Feeding America is the largest hunger-relief and food rescue organization in the United States, with a network of 200 member food banks and 60,000 food pantries and meal programs. Feeding America’s goal is not only to provide meals for people in need, but also to provide nutritious foods that are the building blocks to a healthy life. Thanks to funding from Disney, food banks nationwide have been able to create strategic produce plans to grow local produce channels that help meet the needs in their service area. Funds have also supported investments in assets and infrastructure to help reduce barriers to sourcing and distributing fresh produce to the people they serve.

“As we work to increase the amount of fresh fruits and vegetables distributed through the network, it has been reassuring to have Disney supporting us every step of the way,” said Diana Aviv, CEO of Feeding America. “We know that produce is one of the most requested items at our food banks. The Walt Disney Company enables us to implement strategies to grow that food source and ultimately improve the health and well-being of the people we serve.”