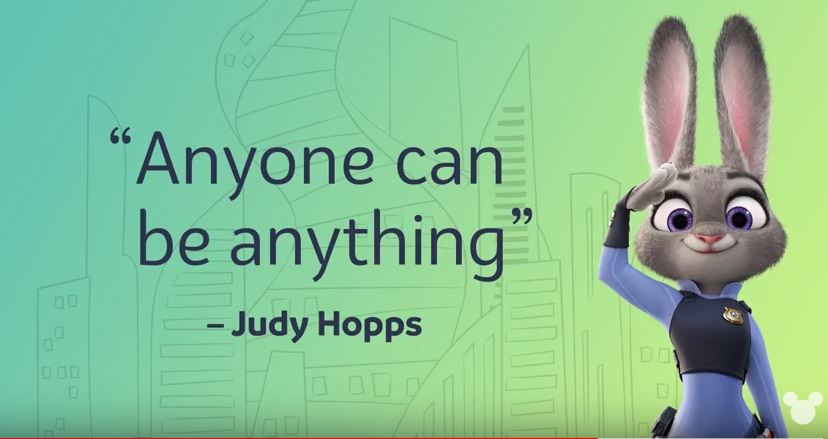 Judy Hopps wanted to be the first rabbit police officer in Zootopia, but she had to overcome prejudice and bullying to earn her badge. In a new special edition of “As Told by Emoji,” the creators of Zootopia released a video PSA for October’s National Bullying Prevention Month to tell Judy’s Journey. The video PSA was inspired by Walt Disney Animation Studios’ Zootopia, to help educate and raise awareness for bullying prevention.

Inspired by the themes of Zootopia and the work of Oscar-winning directors Byron Howard and Rich Moore, as well as co-writers Jared Bush and Phil Johnston, Disney Digital Network (DDN) worked closely with the team to create the video, which is available now on Disney’s YouTube, Facebook, and other social media channels, and will also air on Disney Channel.

The video PSA is part of Disney’s ongoing effort to inspire kids, families, and communities around the country to #ChooseKindness and put an end to bullying, in collaboration with PACER’s National Bullying Prevention Center (PACER) and the Gay, Lesbian & Straight Education Network (GLSEN).

“So many of us can relate to Judy’s story – she was bullied for her big ideas and overcame the challenges around her to become what she had always dreamed,” said Zootopia director Byron Howard. “PACER and GLSEN are both tremendous resources for people who feel bullied and need information and support. We are so honored to work with DDN, PACER and GLSEN on this initiative.”

For additional resources and information on bullying prevention, visit Disney.com/BeInspired,