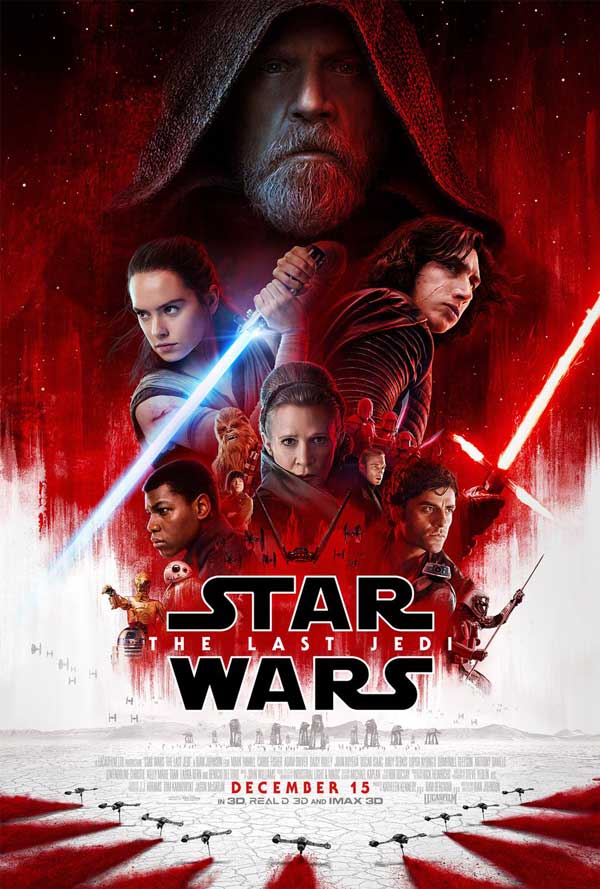 Hot on the heels of a new poster for Star Wars: The Last Jedi, a new trailer debuted during tonight’s Monday Night Football game on ESPN. The new poster features a largely red and white theme. The hooded Jedi Master Luke Skywalker stares directly out at the viewer from the top, below are Rey with her blue lightsaber and Kylo Ren, now sporting a the scar Rey delivered in the previous movie, with his red lightsaber. Among other faces on the poster are two new characters BB-9E, a dark side equivilent to BB-8, and Rose Tico, who we see working with Finn in the previous trailer.

The poster serves as a tease for tonight’s new trailer, which was introduced on field by a squadron of Stormtroopers

Below we’ve gone through the trailer with our first, best guess as to what’s going on. Spoilers ahead!

First, let’s just say that a movie trailer’s job is to do one thing, get you to see the movie. It’s not meant to explain everything you’ll eventually see in the final movie. In fact, it may deliberately try to mislead the audience. There’s definitely some of that going on in this trailer. Let’s break it down.

It starts with a lone figure looking out into a vast cavern full of new First Order was machines. We hear a voice over from Snoke talking about how powerful a Force user he detected and since we next see Kylo Ren on the screen, we’re to presume that Snoke is talking about him. But I don’t think so, we know Snoke meets Rey from later in the trailer, so I think that dialog is actually from that scene or one like it.

We then move to Rey training on the Island Ach-to. The Last Jedi actually starts right where The Force Awakens leaves off with Rey actually handling Luke back his father’s lightsaber.

But we know that she does get it back to train with.

Rey’s voice over explains she’s looking for answers to what that thing is inside her that’s now awake. Something we know as the Force. Rey visits the Force Tree with its shelf of books that contain early writings about the Force, that may have led Luke to a new understanding of the mystery.

And then, more training, including Rey appearing to crack a giant boulder just with her mind. That appears to make Luke uncomfortable, questioning if he can train someone with so much raw power, when he failed completely with Kylo Ren’s training.

The trailer wants us to believe that Luke abandons Rey’s training driving her to Kylo Ren and Snoke.

We then hear from Kylo Ren in voice over and we get a better look at his scar.

Then we see a big space battle with Kylo Ren closing in on the main ship of the Resistance with his mom in side. Can he pull the trigger and kill his mother like he did his father?

In fact, there’s General Leia Organa herself, looking pensive, or perhaps trying to reach out to her son with the Force.

The trailer wants us to think that he does, pull the trigger but I suspect that there might be a different arc in store for Kylo Ren in this film.

We then see a bit more of a battle with the Millennium Falcon flying through some mines fighting tie-fighters. And a look at Chewbacca and a Porg traveling together through the end of time exploring space together in their TARDIS… oh wait, wrong show. But the Port is, in fact, cute. So no worries there.

Let’s not forget Poe Dameron. He’s on a ship looking at what appears to be a space battle outside, then he’s piloting an x-wing attacking the First Order.

Then we finally see Finn (who recovered from that medical unit we saw him enveloped in last trailer). Now he’s fighting Captain Phasma, who escaped that trash compactor after all. Finn is in a First Order uniform. Which confirms that plot line that part of his role in this film would be to infiltrate the First Order station.

Luke has a warning for whomever he’s talking to. Things are not going to go according to plan.

A few brief scenes of a battle on the mine planet, and we see Snoke in his gold robes, in person this time. No hologram projection. He’s talking to Rey, perhaps even torturing her.

And then this is where I think the trailer really tries to pull one over on us. It makes it look like Rey and Kylo Ren are talking to each other with Rey giving herself up to him for training. But a careful look at the backgrounds reveals they’re in two different rooms at this point. They may meet in the movie, but I don’t think it’s like the trailer shows us here.

That’s it. All in all, another great trailer. It doesn’t show us too much, but it does show just enough more from each main character to keep us excited. December 15th seems a long way off, but it’s really just a little over 2-months away. We should see a lot more marketing between now and then. Will you be watching or trying to avoid more spoilers?