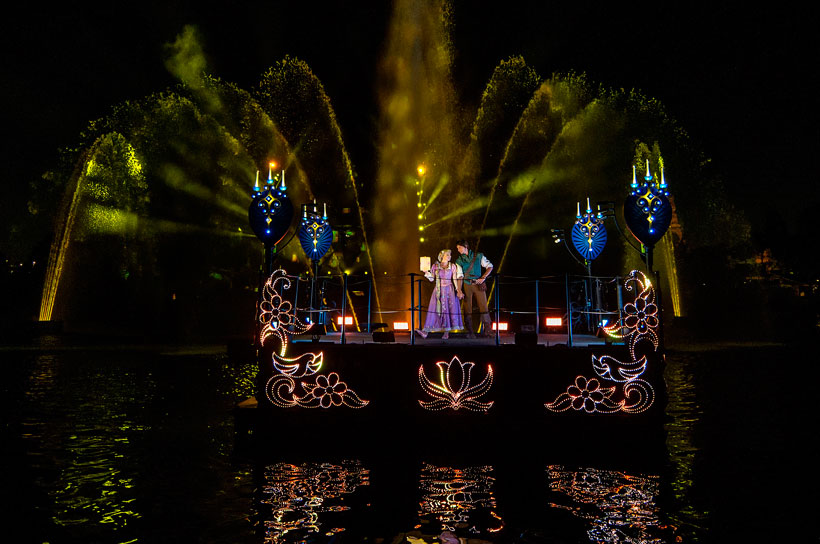 Is Mickey’s imagination strong enough to overcome all the forces of evil? Find out in the recently revised Disneyland nighttime extravaganza Fantasmic! The show was livestreamed on Facebook last night and is now available for everyone to watch.

Among the new material is Aladdin and Jasmine floating over a bed of fog on their flying carpet, Captain Jack Sparrow at the helm of a ghostly pirate ship, and special new appearances by characters from “The Lion King” and “Finding Nemo.” And Rapunzel and Flynn Rider from “Tangled” join other Disney couples in an inspiring romantic sequence.

Additional enhancements give the popular show an even brighter look, with more vibrant projections and new mist screens. Every inch of every surface on the show’s island “stage” has been digitally mapped. Projection mapping and three-dimensional video combine, allowing the creative team to transform the island as never before. All technical elements of the show, including lighting, fountains and water screens, have been upgraded.

There’s some fun introductory material from the hosts, but if you want to just watch the show, jump to the 18:15 minute mark:

Our suggestion is to watch now before Disneyland hides the video. (If it’s gone, you can findit on Youtube too, like the one we’ve embedded below.)

Did you know that Fantasmic! involves a cast and crew of over 100 and runs approximiately 23 minutes long. The dragon rides 45-feet above the stage, is 28 feet wide and ways approximately 9 tons. Each seating of Fantasmic! can host around 9,000 people (more if they’re all good friends) around the Rivers of America. When Fantasmic! premiered in 1992 it was accompanied by a complete upgrade to Tom Sawyer Island adding the boat dock and cider mill that become the stage at night.

What is your favorite moment of the new Fantasmic!?

Bonus: Here’s the show from another angle: