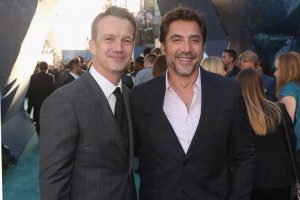 HOLLYWOOD, CA – MAY 18: President of Walt Disney Studios Motion Picture Production, Sean Bailey (L) and Actor Javier Bardem at the Premiere of Disney’s and Jerry Bruckheimer Films’ “Pirates of the Caribbean: Dead Men Tell No Tales,” at the Dolby Theatre in Hollywood, CA with Johnny Depp as the one-and-only Captain Jack in a rollicking new tale of the high seas infused with the elements of fantasy, humor and action that have resulted in an international phenomenon for the past 13 years. May 18, 2017 in Hollywood, California. (Photo by Jesse Grant/Getty Images for Disney) *** Local Caption *** Sean Bailey; Javier Bardem