This week in Marvel’s Agents of SHIELD we finally get to see how May got captured and we even got to see what fantasy Radcliffe tried to trick May with last week. Radcliffe also reveals that they have a second LMD in SHIELD.

At SHIELD, the team is considering their next move. Talbot wants Daisy to sign the Sokovia Accords now that she’s a legitimate SHIELD agent again. Daisy and Coulson agree but only because it will give them an opportunity to plant surveillance in Senator Nadeer’s office, an opportunity Talbot wants nothing to do with.

Coulson, Daisy, Yo-Yo, Mace and Talbot head off to D.C. Mack is suppose to go with them until he gets a mysterious text and requests some time off because of it. 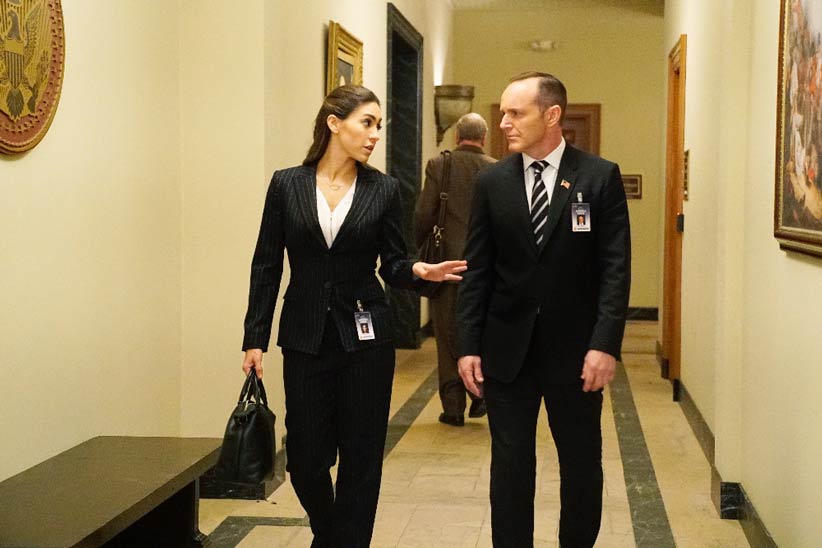 Back in Radcliffe’s office, he and Aida confirm that May is sedated again and won’t be a problem. But as soon as they leave the room, May opens her eyes, grabs a piece of glass next to her and begins cutting her restraints. After a few tense minutes, she frees herself and attempts to escape. Unfortunately, Aida is waiting for her and attacks. Fortunately, May is still May and gets the upper hand.

In DC, the meeting for Daisy signing the Accords begins with a line of questioning from various government officials, including Senator Nadeer. She accuses Daisy and SHIELD, of engineers illegal activities in the past and even at this moment. Two guards then walk in with Yo-Yo and Coulson in cuffs. Nadeer’s office was boobytrapped and they were caught.

After more talking, the bad news is that there will be an investigation of SHIELD but the good news is that Coulson and his team know there is a leak.

“May” figures out she’s the leak and goes to confront Radcliffe. In the middle of the confrontation the rest of SHIELD shows up to arrest the mad scientist because Fitz has figured out the Radcliffe was behind Aida’s attack as well.

Yo-Yo confronts Mack about his disappearance and tells her about his daughter, Hope, who died four days after she was born. Her 11th Birthday would have been the next day so we went to visit his ex so they both wouldn’t be alone.

Once back at SHIELD, Fitz visits Radcliffe in containment and figured out that this Radcliffe is an LMD as well. The real Radcliffe is meeting with Nadeer. The final scene reveals that May’s escape attempt was part of her new sedated fantasy but that he’s changed the fantasy again taking May back to Baharain but instead of killing the little girl, May saves her.

If you thought there weren’t enough twists and turns this week, just wait till next week. The Koenig brothers are back and ABC has promised to reveal their secret this time.