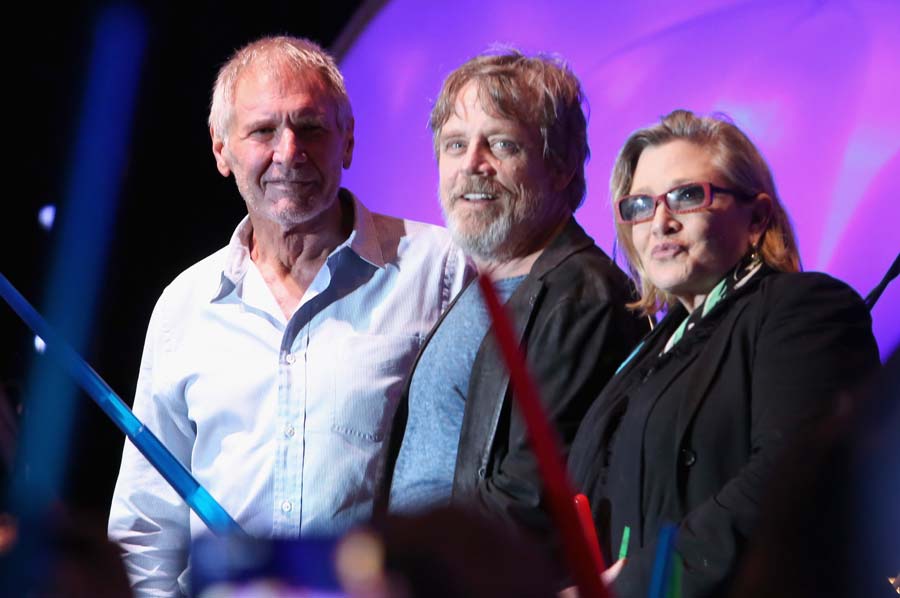 The Star Wars universe is still reeling from the death of Carrie Fisher on December 27. Her passing has left a great disturbance in The Force as Fisher, in her role as General Leia Organa, was set to appear in both Episodes VIII and IX.

General Organa originally had a larger role in “The Force Awakens” but part of it ended up on the cutting room floor. In Episode VIII, which is in post-production now, it was important that her role be expanded (it’s likely that she and Luke have a reunion as she continued to run The Resistance) and was expected to have even larger role in Episode IX as she and Luke confronted her son Ben, aka Kylo Ren.

It’s being widely reported that the story trust at Lucasfilm will be meeting with Colin Trevorrow and Derek Connolly, who are writing the script for Star Wars Episode IX (Trevorrow is also directing), on January 10th to discuss options on what do do with the character of General Leia Organa. The role of Leia, of course, was originated by Fisher who played the Star Wars princess, senator, and general in four Star Wars movies. Fisher’s death has left many people grieving, including the folks at Lucasfilm some of whom had worked closely with her at one point or another.

But what will that path look like? Some of the options they could explore:

Option one would be to reduce the role of General Organa in Episode IX, giving some of her scenes and lines to another character (a new character or perhaps Rey or Billie Lourd’s character). For the scenes where Leia is required, use a combination of existing unused footage (I’m sure there’s quite a bit from the two episodes they’ve already filmed), some CGI magic like they did with Grand Moff Tarkin in Rogue One, and stand-ins filmed from behind, to work around the actresses death.

There’s the matter if this is the most respectful to Carrie Fisher’s memory or not. Would audiences accept seeing the character on screen for an actor they know is dead? The did it in “Furious 7” when Paul Walker died mid-way through filming. So it is possible.

Option two would be to just recast General Organa. This is a tradition in Hollywood. James “Rhodey” Rhodes was recast in the Iron Man trilogy from Marvel with Don Cheadle replacing Terrance Howard. Katie Holmes was replaced by Maggie Gyllenhall in Christopher Nolan’s The Dark Knight trilogy. Even Jennifer Parker in the Back to the Future Trilogy was recast when Claudia Wells decided she needed to care for her ill mother. Elisabeth Shue stepped in and even refilmed the closing scene for Back to the Future shot-for-shot for the opening of Back to the Future 2.

Would it be easy? No. Carrie Fisher has been iconic in the Princess Leia role. Her wit, strength, and style would be hard to recast. Anyone who did step into the role, would undoubtedly put their own touch on the character, changing her. Fans may not be able to abide.

Option three is to write the Organa Character out of the trilogy. In this scenario they would make subtle changes in Episode VIII by changing a line here or adding a scene there to imply some sort of growing threat to General Organa (Bounty Hunters, perhaps?). Then they would write an Opening Crawl for Episode IX that deals with the off-screen death of Leia. Something like this:

“The forces of THE RESISTANCE are still recovering from [the events of Episode VIII]. General Organa was elected new President of the new Republic only to be assassinated by the evil forces of THE FIRST ORDER.

Now a small band of spies and fighters led by the Jedi Master Luke Skywalker take on a final mission that will decide the fate of the galaxy, but first they mourn the loss of Leia…”

The movie opens with President Organa’s funeral and then Luke, Rey, and Finn get on the Millennium Falcon and take off on their adventure.

Writing General Organa out of Episode IX is not ideal, but having her die would give some extra motive for the characters that remain to defeat the First Order.

It’s hard to think about an Episode IX without Princess Leia, but the point of doing this third trilogy has been to hand off the franchise from the old guard (Han, Leia, Luke) to the new (Rey, Finn, Poe). It’s unlikely Leia and Luke would have been featured in future films in the Star Wars universe.

Which option do you think is the best for dealing with the role of General Leia Organa now that Carrie Fisher has tragically died?