Located a short boat ride from Magic Kingdom is an often over-looked quick service location at the Grand Floridian Resort and Spa. Gasparilla Island Grill has been closed for refurbishment since October and just re-opened for service at the end of December. 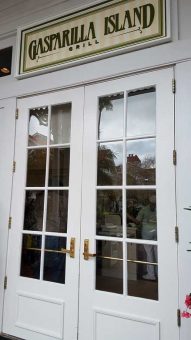 Gasparilla is notable for being one of the few 24-hours service locations at Walt Disney World. In the morning it serves hot breakfast until 11AM and then rocks made-to-order grill items until 11:30pm. There’s also a good selection of sandwiches, burgers, pizzas, soups, salads, desserts and assorted grab ‘n’ go items. You can also pick up a small selection of wine and beer.

The location has indoor and outdoor seating. There’s also a Coca-cola freestyle machine with RFID cups that allow you your original drink and 3 refills in the first two-hours.

Through September 17, 2017 Walt Disney World passholders receive 20% off food and non-alcoholic beverages at Gasparilla Island Grill, which makes it worth the visit for sure.