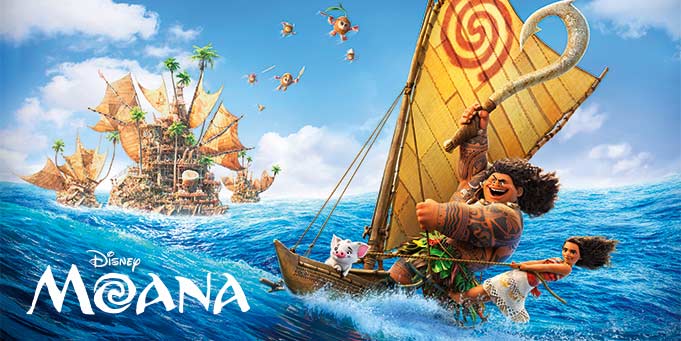 Disney’s movie palace, the El Capitan Theatre in Hollywood, is trying some new things with Disney’s “Moana” that I think are pretty cool. Audiences will be entertained before their movie experience as The Side Street Strutters Jazz Band, as seen at Disneyland perform music from the classic Disney animated films of “Moana” directors Ron Clements and John Musker. Audience members will also see a walk-around “Moana” making her Live Stage Debut exclusively at the El Capitan Theatre.

Tickets are now on sale for The El Capitan Theatre’s presentation of Disney’s “Moana” November 23 to December 11. Plus, see it first on Tuesday, November 22 at 7:00PM with raffle prizes and more!

To experience Disney’s “Moana” with a friendly setting come during Tiny Tot Tuesday screenings, November 29 & December 6 at 10:00AM to see the film with lights dimmed and sound level reduced. Plus, after the movie, get a chance to meet Moana and take your photo with her on The El Capitan Theatre stage.

On select dates, Guests can meet Moana, take pictures and have breakfast by purchasing this additional event with their movie tickets (guests must purchase a movie ticket along with breakfast ticket, which is $30.00 in addition to movie ticket). Each breakfast begins at 8:30AM on select dates prior to the 10:00AM movie at Ghirardelli Chocolate Shoppe & Studio Store. Seating is limited and advanced tickets are required.

Not a morning person? Another offering is the Moana Movie & Meal Package which can be purchased in addition to the movie tickets – you can park once and enjoy twice! Get a movie ticket, meal and $10 playing card for $40.00 per person. First see the movie at The El Capitan Theatre and then choose a meal from a special menu at Dave & Busters located in the Hollywood & Highland Center. Advance reservations required by calling 1-818-845-3110.

Disney’s “Moana” will be preceded by the new animated Disney short presented by Walt Disney Animation Studios “Inner Workings,” which takes audiences inside the human body, where all of the organs have a mind of their own. This short is directed by Leo Matsuda (story artist for Big Hero 6 and Wreck-it Ralph) and produced by Sean Lurie. “Inner Workings” is the story of the internal struggle between a man’s pragmatic, logical side and his free-spirited, adventurous side.

Alright west coast peeps, will you be seeing Disney’s “Moana” at the classic El Capitan Theatre?