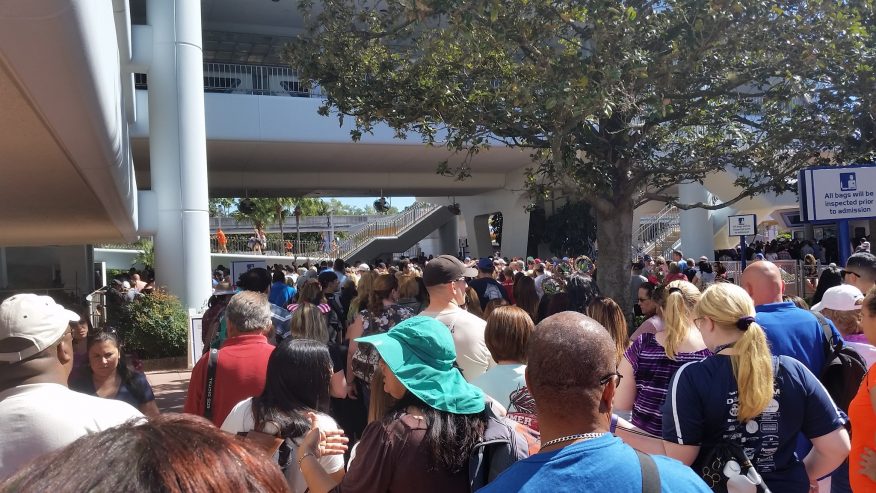 Normally I avoid going to EPCOT on Saturdays during the Food and Wine Festival. The crowds are almost always miserable and yesterday, Oct 22, was a prime example. I happened to be nearby with a few hours to kill so I decided to brave the crowds, if just to have one of those, “I survived” tales.

Getting into the park at 12:30pm was an adventure all its own. I ended up parked at the end of row, opposite from the tram stop, so I walked in. When I got to bag check at the front of the park, both sides had lines at least a couple dozen people deep (see above). Disney security did open up some more bag check tables shortly after I arrived, but it didn’t feel safe at all with some many people gathered in one spot.

The park was, in fact, super busy. So busy that they actually closed the EPCOT Parking lot around 4:45pm Saturday afternoon. The park itself didn’t reach capacity, but so many locals were had decided to take advantage of the near perfect weather to enjoy a few bites and sips around the world showcase.

Guests arriving at EPCOT were instead directed to the TTC where they were given complimentary parking and shuttled over via Bus and Monorail.

Lines are 20+ minutes long at every booth today. Disney missing out on a ton of business by not having more food booths pic.twitter.com/0fVG8xTsxV

As someone who was in the park leading up to the busiest part of the day, I can vouch that lines for every food marketplace booth were at 20+ minutes wait. Anticipating Saturday crowds Disney had opened some additional drink stands, which also had long lines of their own. It was so busy that even quick service locations, which are normally pretty empty during the festival, had lines. Disney could have opened up a second booth next to every food location and lines would have still been 10+ minutes long.

EPCOT Has the second largest parking lot in the world, so its rare to see it filled to capacity. Normally that only occurs during the holiday season. Saturdays during the Food and Wine Festival are always busy, but October 22nd will go down as one of the busiest.

Were you there? Let us know in the comments.