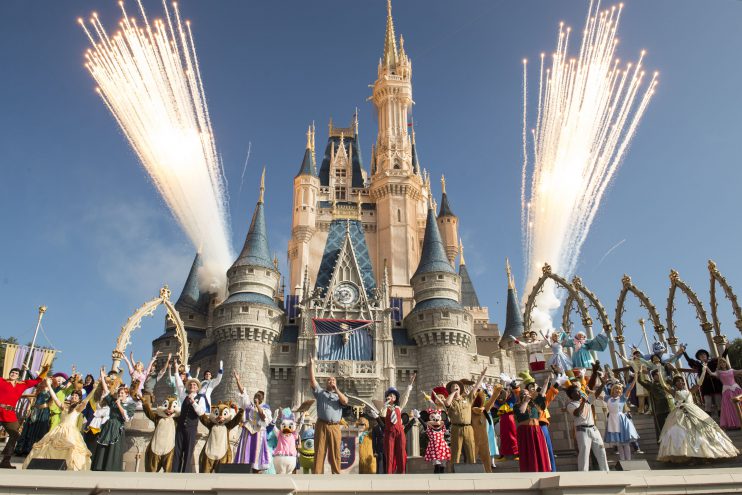 Forty-Five years ago Walt Disney’s vision for a central Florida resort that would transform the hospitality industry forever was realized. It was just the Magic Kingdom, three resorts, and some golf courses, but it was a start. Since that time it has become the number one world destination for family vacations.

To mark its 45th anniversary the park brought out 45 beloved Disney characters on the Cinderella Castle stage in a colorful celebration at Magic Kingdom Park.

The crowds cheered as Mickey Mouse, Minnie Mouse, Goofy, Donald, Pluto and all of their pals flooded the Cinderella Castle stage to the classic tune of “Zip-a-Dee-Doo-Dah” and celebrated the opening 45 years ago on October 1, 1971.

“I was here on that day,” Walt Disney World President George A. Kalogridis told guests gathered in front of Cinderella Castle Saturday. “I can tell you that, for all of us Cast Members, in the resorts and the theme park, both, it was a day of excitement, anticipation, and considerable butterflies in the stomach. But mostly it was a day of joy, because we had the privilege of knowing that we were about to create Disney memories that our Guests could cherish for a lifetime.”

So what do we have to look forward to for the future of Walt Disney Word? In 2017, Imagineers, in collaboration with filmmaker James Cameron and Lightstorm Entertainment, will bring to life the mythical world of Pandora, inspired by Cameron’s AVATAR, at Disney’s Animal Kingdom. The awe-inspiring land of floating mountains, bioluminescent rainforests and soaring Banshees will give guests a transformational experience they will never forget. After that Disney’s Hollywood Studios will open two new themed lands – Toy Story Land and one based on the popular Star Wars movies.

Share your first Walt Disney World memory with us in the comments.

Tags:anniversaryceremonymagic kingdomtheme parkwalt disneywalt disney world
previousAlan Menken Enchants with the Stories Behind the Songs in His One-Man Show
nextTeaser Trailer for Pirates of the Caribbean: Dead Men Tell No Tales