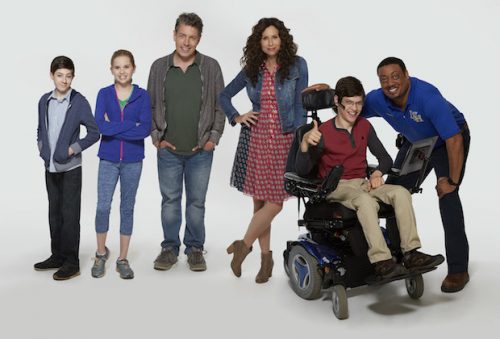 Motive: A family of 5 must deal with the trials and tribulations of having a son with cerebral palsy, and by that, having to put up with what the rest of the world throws their way in response.

Course of Action: It was a very mixed pilot. There was some really smart humor, some small nit-picky things that bothered me, and some tone stuff that was all over the place.

The first episode follows the DiMeo family, headed up by Minnie Driver who is wonderful as the mother who wants the best for her son, even if that means fighting to get her way and putting the rest of her family on the back burner. They have finally found a school for J.J to attend where he isn’t relegated to Special Ed classes and, instead, has a speaker that travels with him from class to class.

Throughout the episode, we see more of Ray, the other brother in the family, then the titular J.J. himself. It was a weird choice to make that I am still not 100% okay with. At this point in the show, I don’t care about him. I care about seeing what life is like through the eyes of a handicapped child who has dealt to long with large amounts of BS. The sister also got a single solo scene that had no place in the pilot. I’m looking forward to learning about both of those kids in future episodes, but in the pilot, I want J.J.

Cedric Yarbrough, playing Kenneth who ends up becoming J.J.’s voice, is spectacular. He is a laugh a second and will bring in some keen observations as the series progresses.

The school and town are very welcoming to J.J. on his first day, but in an almost insulting way. His teacher makes his kids give him a standing ovation (the teacher, by the way, used to star on ABC gem Better Off Ted, which I cannot recommend enough), which, I can imagine, is a topic that will be discussed at multitudes during the show’s run. On the flip side, Kenneth mentions at one point how the reaction is the complete opposite during Black History Month. It’s a joke that hits well, but also brings up a great point. In regular society, people with handicaps are celebrated for their differences and embraced for continuing to make strides, while those of different races are still shunned. I hope that conversation is continually brought up, as it could bring some levity to the conversation at-large.

Overall, I think the show is worth a watch, but this will very much be a situation where we should all watch at least the first 2 episodes to get a feel for if we want to stick with it. The pilot shows promise, but if the trend continues on a lack of J.J. and Minnie Driver’s Maya and more of the other kids, then I will be jumping ship.