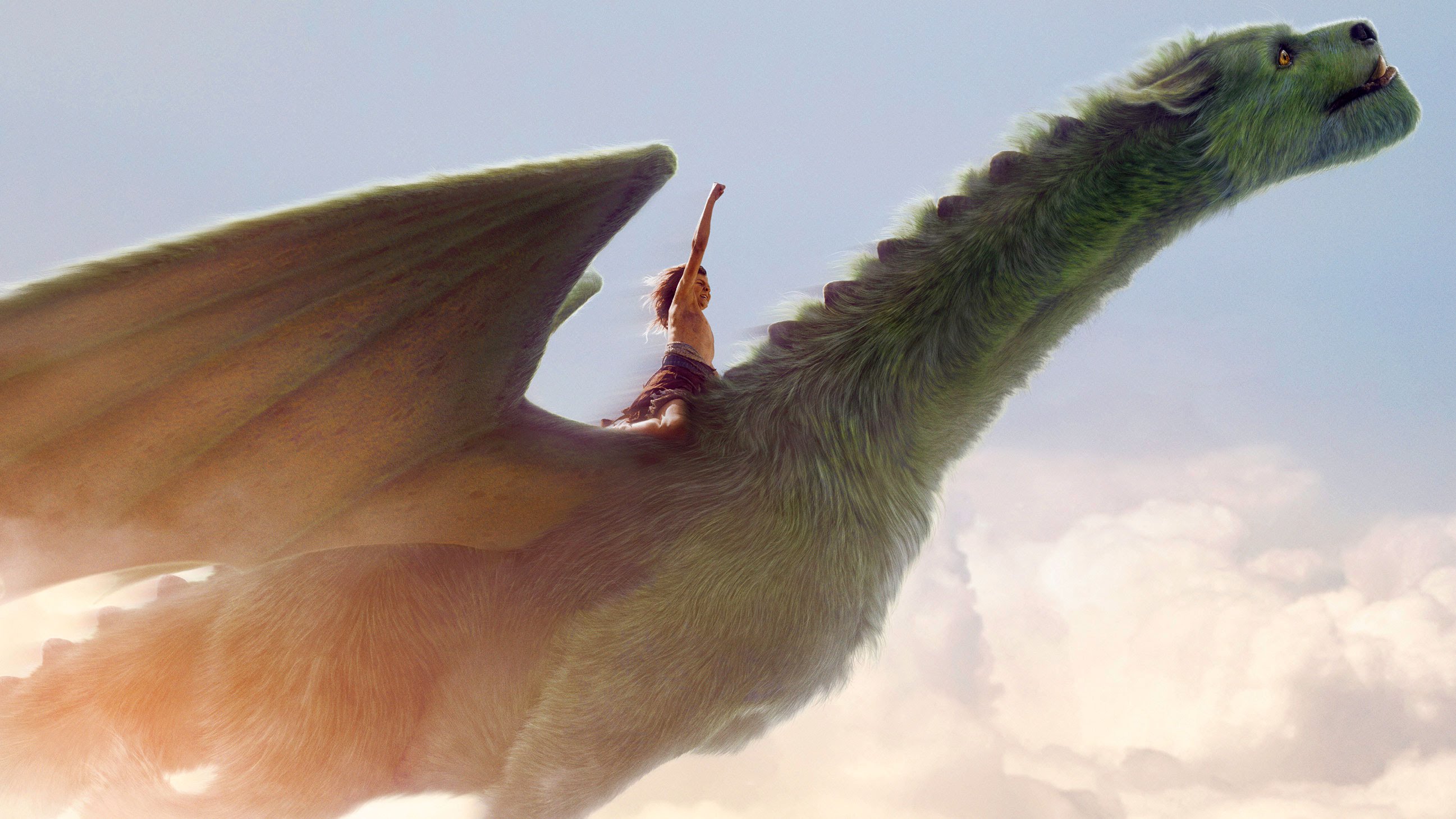 I’m of that generation that grew up with Elliot, the big green animated dragon and his friend Pete, as part of my childhood. It was clearly fantasy,  but also just ‘real’ enough to my 8-year old brain, that Passamaquoddy could have existed and with it an invisible dragon somewhere. I was very worried that the reboot of Disney’s Pete’s Dragon wouldn’t be able to recapture that feeling.

Director David Lowery disposed of almost everything from the first movie (except the names Pete and Elliot and that Elliot is a dragon), but he managed to keep the just-this-side of reality fantasy feeling of the original. It’s all the realism he put in the film that allows the whimsy of a Disney story to actually work for present day film audiences.

Instead of a musical, Lowery’s movie is almost an indie art film mood piece. Set in the modern-era (my guess is the 80s sometime, but it is relatively timeless), the movie combines the amazing forests and landscape of New Zealand (standing in for the Pacific Northwest) with a C.G.I. creation that still manages to have an impressive physicality on screen. Disney’s animators fill Elliot with heart and feeling without him ever uttering a word.

The story follows Pete (played at 4 years old by Levi Alexander and at 10 by Oakes Fegley). The movie starts with Pete’s family on a car trip about to have a big adventure in the wilderness of the Pacific Northwest. Pete is reading his favorite book, “Elliot Gets Lost,” about a dog, when a deer causes an auto accident that leaves Pete on his own in the forest. About to be devoured by wolves, Pete is rescued by a giant furry, green-tinted, winged, and dog-faced dragon. It’s natural for Pete to name him Elliot.

The film then jumps 6 years ahead when Pete and Elliot have lived together in the forest completely devoid of other human contact. They’ve built a fun life together, which is interrupted when Pete encounters another human deep in the forest.

That human is Grace (Bryce Dallas Howard), a forest ranger and the daughter of Mr. Meachem (Robert Redford). Meacham plays the narrator role and the crazy old man who says he once saw a dragon role too. Grace is the fiance of Jack (Wes Bentley) who is in the logging business and whose brother Gavin (Karl Urban) is a bit of a wild spirit. Actually Gavin reminded me a lot of another Disney character – Gaston. After an encounter with Elliot, Gavin decides that he must capture him and thus begins the real conflict of the film.

Meanwhile Grace takes Pete back into town with the goal of finding his family. When the truth is revealed, she struggles with what to do. Pete, for his part, is growing attached to these other humans and is conflicted between his love of Elliot and his need to be with a family.

Those are some pretty significant themes to explore and the movie dispenses with nearly everything else to focus on them. It works really well – considering the implausible premise of the film. Although the movie drags a bit in the middle, and the under-utilization of Robert Redford is a crime, Elliot himself is fantastically portrayed. Oakley also does an amazing job representing the feral kid who misses his friend immensely while still being interested in everything new he’s learning.

The animation choice to make Elliot more of a big dog than a goofy dragon was a great one. When Elliot flies, his giant wings scoop the air and his legs make a dog paddle motion. It’s very charming and almost believable. The bond  between Pete and Elliot is also very believable, so when the movie places it in conflict you really feel for the pair.

In the end, I’m proud to dub Pete’s Dragon a new Disney classic. It takes the childlike wonder of Disney’s family films and successfully updates them into a world when CGI can create just about any experience. The movie is fantasy, but that’s ok. The force that Elliot creates allows you to explore that metaphorical dragon in your life and how you would react if it were to suddenly appear in your life.

Disney’s Pete’s Dragon opens today in the US and Canada..