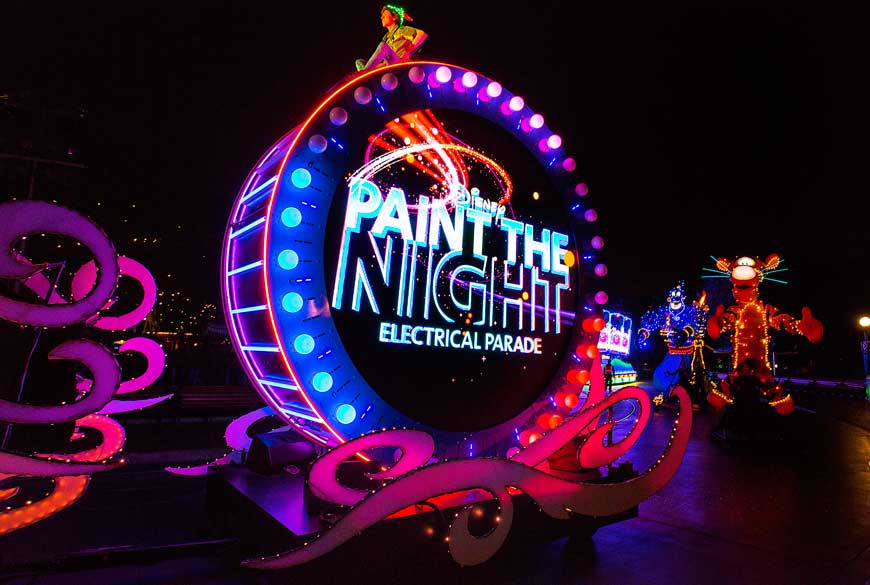 We already knew that the end of Disneyland’s Diamond Celebration would mean the closure of two shows created specifically for the park’s 60th anniversary. The spectacular projection and fireworks show “Disneyland Forever” will be replaced with “Fantasy in the Sky” (which will run Fridays through Sundays” and “World of Color – Celebrate” will revert the original show. While it had been rumored, it was also the first time we heard official word Disney “Paint the Night,” a new electrical parade, would also close.

In a comment on the Disney parks blog, Disney’s representative stated, “‘Disneyland Forever,’ ‘Paint the Night’ and ‘World of Color – Celebrate!’ were each created for the Disneyland Resort Diamond Celebration, which concludes September 5. … Future plans for these shows have not been determined.”

That’s a little stretch of the truth as “Paint the Night” was largely copied from the Hong Kong Disneyland version. But it did debut at Disneyland as part of the park’s 60th anniversary celebrations.

It’s hard for me to believe that the Walt Disney Company would invest in all that projection technology and the new electric night parade and not continue to use them somehow. I expect a new holiday show that uses the digital projection equipment and wouldn’t be surprised if Paint The Night ends up at Walt Disney World to replace the aging Main Street Electrical Floats. However, we already know that MSEP can’t return to Disneyland since that parade was already had its ‘glow away forever’, right?

What do you think Disney should do with Paint the Night and Main Street Electrical Parade?