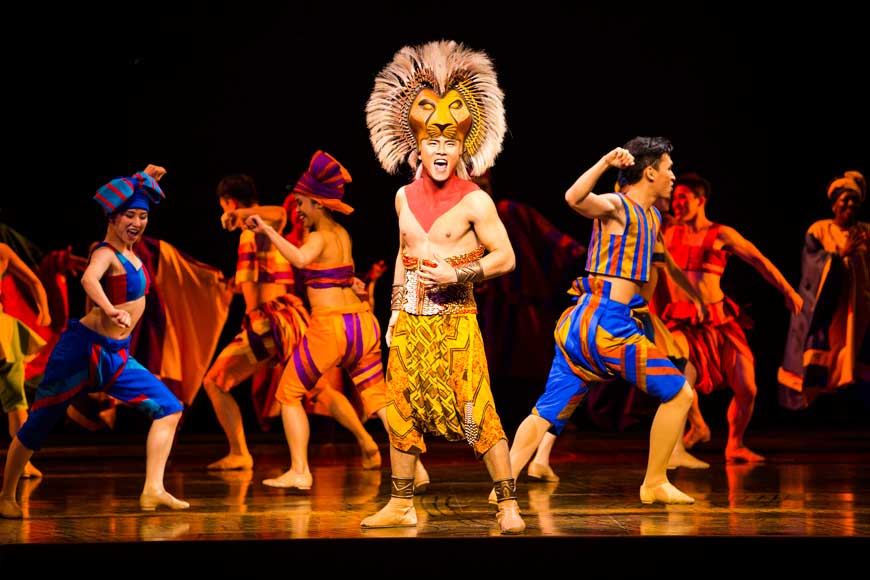 If you’ve ever wondered what a lion’s roar sounds like in Mandarin, the first ever Mandarin production of Disney’s The Lion King just premiered at the new Shanghai Disney Resort as part of a gala affair at the Walt Disney Grand Theatre. The premiere launched the Grand Opening festivities for the new resort, which officially opened on June 16 (which was yesterday in the US). A red carpet entry to the new theatre welcomed celebrities, luminaries and Julie Taymor, the Tony Award-winning director of The Lion King.

One of the most popular and acclaimed musicals of all time, the Broadway hit is presented at the lavish, 1,200-seat theater in Disneytown, the resort’s retail, dining and entertainment area. This is the first time the full Broadway production will be presented at a Disney resort anywhere in the world.

“We are very proud to present the world premiere of the first-ever Mandarin production of Disney’s beloved classic, The Lion King,” said Bob Iger, chairman and chief executive officer, The Walt Disney Company. “This historic performance brings the story to life for our guests in a way that is authentically Disney, distinctly Chinese and completely unique.”

The Mandarin production marks the ninth language for this long-standing Broadway musical, which debuted on Nov. 13, 1997. The Lion King has been enjoyed by over 85 million people in 20 countries across six continents, and has garnered more in ticket sales than any movie or stage play in entertainment history. For this production, Disney auditioned in more than a dozen cities in China and Asia to put together the ideal cast of more than 50 performers. The multi-national cast ranges from newcomers to seasoned professionals, with talent from Shanghai and across China plus 10 South African performers.

The 23rd global production of this highly successful Broadway musical will contribute to the one-of-a-kind immersive entertainment found throughout Shanghai Disney Resort.

The Walt Disney Grand Theatre, designed in Deco industrial style, is reminiscent of the grand theaters of old Shanghai. It has a Chinese fan motif on the marquee, front door, carpet and acoustic panels and is an icon for Disneytown. With separately ticketed shows, it introduces a world-class theatre experience to Shanghai and offers guests the opportunity to enrich their resort experience. Guests walk to the theatre along a floral-inspired paving pattern that comes to life at night with sparkling lights.