Not only will Disney’s Hollywood Studios need more parking in anticipation of two new lands opening up (those being Toy Story Land and a Star Wars themed land), it will need a brand new entrance as well. Moving the entrance to a brand new interchange at Osceola Parkway and Victory Way will finally redirect heavy traffic off Buena Vista Drive (today’s 2nd entrance) and give Imagineers a little extra room to play with for the expansion of DHS.

Walt Disney World, via the Reedy Creek Improvement District, filed plans with the South Florida Water Management District last week to show how the new exchange would impact plans for water runoff and water retention. It gives us our first indication that Disney plans to move forward with the new entrance and how they will close the old entrance at World Drive too. In short you’ll be able to arrive at Disney’s Hollywood Studios via either Victory Way or Osceola Parkway. From Osceola park way you will exit to the right and then take a fly-over bridge to the new entrance toll plaza. To exit the process will be in reverse. The Buena Vista street entrance will be close to cars (but open to Disney buses) entering the parking lot, but remain an exit from the parking lot.

The old entrance will be closed (although it looks like a small access road to backstage will be added). This will allow the new Star Wars land to be aligned outside the existing borders of the park, also allowing some much needed room for expansion in the years to come.

Disney will be making over a second interchange on property as well. This one will allow cars heading to the Magic Kingdom resorts to divert around the Magic Kingdom Toll Plaza. If you follow the spaghetti strands you’ll see where a couple well placed bridges will eliminate the need for the stop light that Disney recently put in at this intersection. The question is, what will they do with all the traffic while they build this much needed traffic improvement? 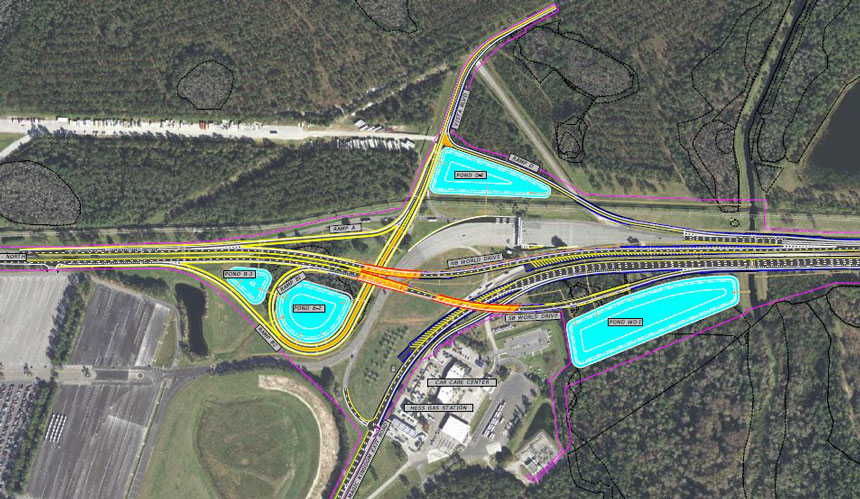 I get the feeling that the Walt Disney World transportation system is just in a holding pattern until Google, Apple, Tesla, or somebody perfects the self-driving shuttle. That day is probably a lot closer than most people think (it’s already being testing in Singapore on Sentosa Island). Still, it’s nice to see Disney investing in transportation improvements (if you’ve been to Disney Springs recently, you’ll have seen some major improvements, including new bus only lanes). But a bigger swing is needed, and likely soon. What do you think?