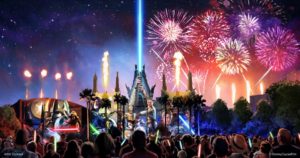 Starting in summer 2016, a new Star Wars fireworks show, “Star Wars: A Galactic Spectacular,” will debut to guests at Disney’s Hollywood Studios. The nightly show will combine fireworks, pyrotechnics, special effects and video projections that will turn the nearby Chinese Theater and other buildings into the twin suns of Tatooine, a field of battle droids, the trench of the Death Star, Starkiller Base and other Star Wars destinations. The show also will feature a tower of fire and spotlight beams, creating massive lightsabers in the sky. (Disney/Lucasfilm)