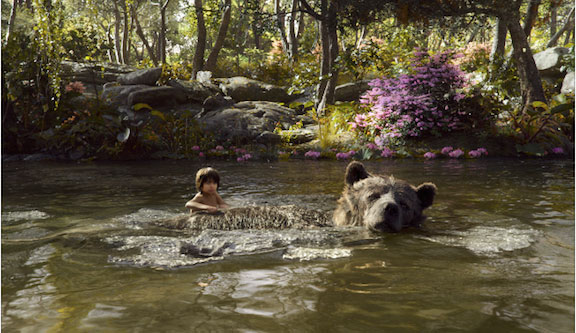 With its live-animation photo-realistic remake of the Walt Disney animated classic “The Jungle Book,” Disney is walking a fine line. They have to honor the classic, while at the same time meet the expectations of modern, more cinematic savvy audiences who are used to spectacle on a super-sized sale.

In a new TV Spot for the 2016 remake we see how they are honoring the original, but also how they’re taking it to the next level. The animals are very believable and yet still related to the original movie. Plus Disney has introduced some familiar melodies of music from the original into this new trailer:

What do you think? Are you excited to see Disney’s The Junble Book when it opens on April 15th?

Along the way, Mowgli encounters jungle creatures who don’t exactly have his best interests at heart, including Kaa (voice of Scarlett Johansson), a python whose seductive voice and gaze hypnotizes the man-cub, and the smooth-talking King Louie (voice of Christopher Walken), who tries to coerce Mowgli into giving up the secret to the elusive and deadly red flower: fire.

The all-star cast also includes Lupita Nyong’o as the voice of the fiercely protective mother wolf Raksha, and Giancarlo Esposito as the voice of wolf pack’s alpha male Akela. “The Jungle Book” seamlessly blends live-action with photo-realistic CGI animals and environments, using up-to-the-minute technology and storytelling techniques to immerse audiences in an enchanting and lush world. The wild adventure swings into theaters in 3D on April 15, 2016.