JJ Abrams had a Galaxy sized problem to solve in ‘Star Wars: The Force Awakens,” how to re-launch a cherished movie franchise in a way that respected the past while still being relevant to modern movie going audiences. Episode VII had to do all that and set up the stories for episodes VIII and IX. I’m happy to say that Abrams has proved himself up to that task and much more.

From the very first moment, you know you are watching a Star Wars movie when the classic words “A long time ago, in a galaxy far, far away” are displayed on the screen. But there is an immediate obvious difference too, no 20th Century Fox logo or fanfare ahead of the titles, just the Lucasfilm logo. Even though Disney is distributing the film (and owns Lucasfilm), there is no Disney castle logo. That’s meant to indicate how Lucasfilm really was able to make their own film, not a Disney film.

There had been some question if Director JJ Abrams would continue the traditional opening crawl of yellow text. The crawl is back and it quickly catches the audience up with the last 30 years that have passed in the Star Wars universe while also introducing the main thing which everyone is pursuing throughout most of the film. I can’t say much more without venturing into spoiler territory. Let’s just say that you get a couple major questions answered even before the crawl is over.

Speaking of spoilers, I was relieved to find that what we’ve already seen in the trailers in no way spoils the film. Sometimes the clips are used out of context just to provide a beat in the trailer and the in movie meaning is something completely different. In every case, what you see in the trailer has a different or deeper meaning in the film. 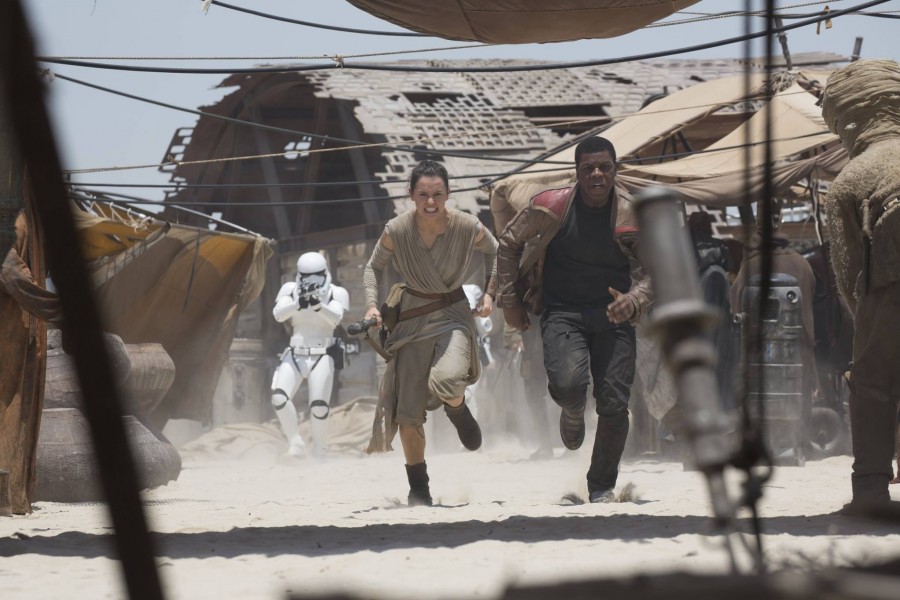 “The Force Awakens” opens up by spending a good amount of time introducing us to new characters in the Star Wars universe, but the story is driven by action too. Before we know it, there’s an amazing space ship battle across Jakku and we’re getting reacquainted with first characters from the original trilogy too.

Abrams has left clues in the film in the form of parallels with other Star Wars movies. Things aren’t always what they seem, but if you sense something familiar, it means you need to be paying attention.

Another way you know you’re in a “Star Wars” film is the number of tropes Abrams has included. Yes, the bad guys have British accents and the good guys sound American. The Storm Troopers may be a little more bad ass in “Awakens” but for the most part, they still can’t hit the broadside of the barn. You encounter fantastic worlds filled with every different type of alien life imaginable and spies are everywhere. There are great dogfight battles between TIE-fighters and X-wings too. Of course, there is “The Force” too.

All this is comforting to an old Star Wars fan, but there are subtle differences too. “The Force Awakens” is set 30 years after “Return of The Jedi,” technology has improved in some areas, atrophied in others. Not every character has escaped the last 30 years unscathed either. Great tragedies in the last 30 years, echoes some of the themes from the prequels.

One of the things Abrams said he loved about the Star Wars universe, as created by George Lucas, was how Lucas often left things unexplained in the movies. No one said what a Kessel Run was, that was left up to the imagination, but it was clearly communicated that it was an important achievement. Abrams adopts the same philosophy in “The Force Awakens,” creating new myths even as he explores old ones. Sometimes moments in the film pass by so quickly that I want to pause and rewind, I guess that is built in repeatability. 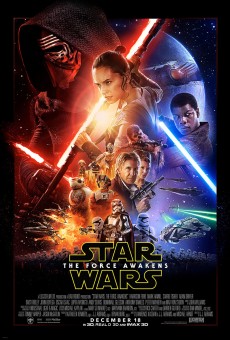 The story in “The Force Awakens” is driven by action and supported by characters who have to quickly adapt to the new challenges they face because of that action. There were moments when the story paused and the audience was allowed to catch its breath, but mostly the story keeps moving forward. It is both intimate and epic in scope, sometimes simultaneously.

I did have a few quibbles, most of which I can’t discuss without spoilers, but I will say the pace of the film sometimes meant that emotional beats that should have been in the film were passed over too quickly or missing entirely. I’m not sure if these were editing decisions for pace or a plan to leave certain emotions out of the film. But it did seem a tad bit out of character at times.

Some of my favorite moments in the film arose from its humor. Even in the film’s most fever pitched battles, there are moments of levity that give the film a “star Wars” feel. There are also moments on the far opposite spectrum of emotion. One major shocking moment will have everyone talking after the film. But because the film’s plot moves based on action, there is almost no time in the film to internalize what you just saw. I’m sitting here 6 hours later at home and I still don’t think it’s sunk in.

I was nine years old when I saw “Star Wars” for the first time and became a fan. Episode VII made me feel the excitement of that young kid all over again. If you are any kind of Star Wars fan yourself, I urge you to get out to the box office this weekend and see the film. It’s definitely better experienced without being spoiled ahead of time. I did not get to see it in 3D yet (I have tickets to do so Thursday night) and saw it on a decent size screen and thoroughly enjoyed it. I do think the film will benefit by seeing it on the largest screen you can (it’s playing on over 4,100 this weekend), but don’t worry too much if you can’t get an IMAX or RDX ticket. Just go see it.

“The Force Awakens” has attracted a PG-13 film for some sci-fi violence. It definitely deserves that rating, but a child who is aware that what they see on the big screen is fantasy, not reality, should be able to handle it.

I will be working on a spoiler-filled review that will go live later this week, after the majority of those who have first day tickets have seen the film. I’m anxious to discuss the movie with you and hope you’ll come back then to discuss it in full. In the meantime, if you do see the film, we’d love to know what you thought, just avoid leaving comments with any spoilers in them. Thank you.

“Star Wars: The Force Awakens” opens in the US on December 18th (with some early screenings starting tonight and Thursday).