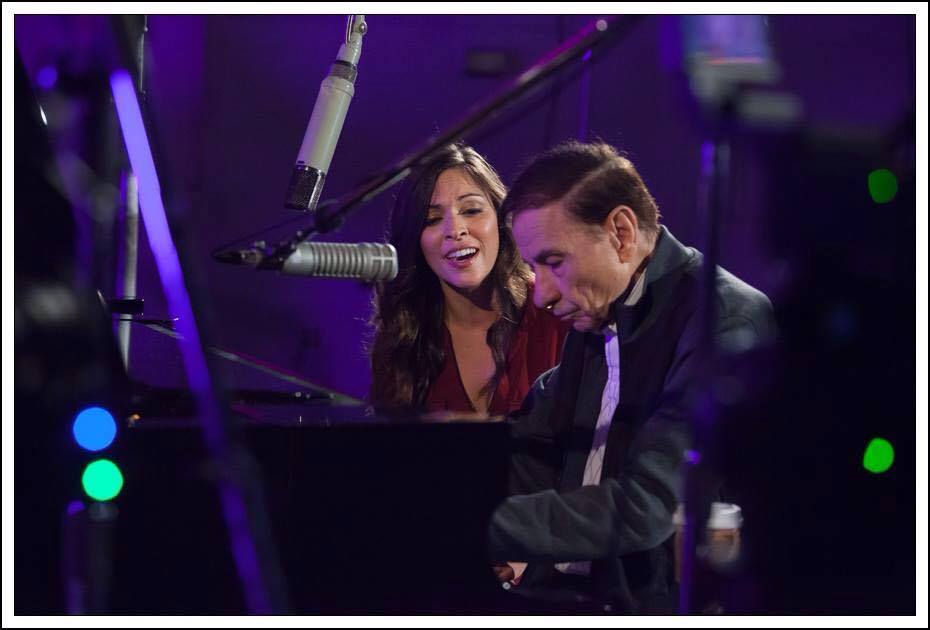 Singer Juliana Hansen joins legendary songwriter Richard M. Sherman as part of the PBS SoCal special “Richard M. Sherman: Songs of a Lifetime” airing this Thursday at 7pm PST. The show will air in other markets across the country in 2016.

For Richard Sherman, the past year has been among the most rewarding he’s experienced. Even at age 87, he’s still sharing his unique ability touch audiences from cradle to grave with songs he wrote with his brother Robert, other collaborators or by himself.

The beloved Disney Legend teared up earlier this year watching as director Brad Bird and composer Michael Giacchino worked with an orchestra to record “Great Big Beautiful Tomorrow,” written by the Sherman Brothers in the 1960s, as part of the score to the film, “Tomorrowland.”

Sherman wrote a new song, “A Kiss Goodnight,” for Disneyland’s latest fireworks extravaganza and performed “Feed the Birds” with Ashley Brown (Broadway’s Mary Poppins) before they led the crowd in singing “Happy Birthday” to Disneyland on its 60th anniversary this past July 17.

Cherished by Disney fans worldwide, Sherman participated in the D23 Expo from Aug. 14-16, working with Brown and others. He received the Walt Disney Family Museum’s inaugural Diane Disney Miller Lifetime Achievement Award and performed Nov. 3 at the institution’s first gala, helping raise about $500,000 for its arts education program. He also was there on Dec. 7 to step back in time at the dedication of Walt Disney’s restored 1966-era office suite at the studios in Burbank.

And now, Sherman is starring in a one-hour PBS concert special that premieres at 7 p.m. Thursday in the Los Angeles television market before rolling out to other PBS stations across the country in 2016 (check local listings).

Don Hahn has deep ties to The Walt Disney Studios, producing live-action, documentary and animated films. He is also on the board of PBS SoCal and on the WDFMuseum’s advisory committee. He produced both the museum’s gala and the new PBS special, “Richard M. Sherman: Songs of a Lifetime.”

According to Hahn, the PBS special grew out of watching Sherman’s performances at D23 events. In 2013, Sherman and composer Alan Menken shared the D23 arena stage in a two-hour plus concert for more than 4,000 Disney enthusiasts. At the D23 Expo this past August, Richard was back at the piano several times to perform a song or two as well as greet fans.
“It was frustrating because every time I saw Richard play in front of a fan convention or at D23, nobody was filming it. It was kind of evaporating into thin air,” Hahn said. “So I called Richard up — it’s just been three months ago — and said, ‘hey if I got a camera crew together, would you come in and play your songbook?’

“So he did. We put (Sherman) in this wonderful, historic studio on Sunset Boulevard — it was Frank Sinatra’s old studio — sat him at the piano and he sang from his songbook. There’s about 30 or 35 songs that he sings for this one hour special on PBS. It’s pretty breathtaking.

“If you’ve ever seen him play live, you know that feeling to hear your entire childhood go by in front of you. It’s not only songs from Disney,” Hahn continued. “We also included some of his beloved songs from movies like ‘Chitty Chitty Bang Bang,’ ‘Charlotte’s Web,’ and ‘Tom Sawyer’ and we certainly included his Disneyland songs like ‘The Tiki Room,’ ‘Great Big Beautiful Tomorrow’ and ‘It’s a Small World’ — all those things we learned to love from the Sherman Brothers.”

Hahn said they filmed “everything that Richard was willing to do. The thing about him is that he’s 87 years old, but that’s so not an issue. He sits at the piano and you say, ‘hey, what about something from Winnie the Pooh?’ and he goes, ‘I got that’ and plays it. It’s so wonderful to sit there. He’s like a human jukebox and every song conjures up great memories.”

The PBS special also includes guest performances by Broadway star Brown, Juliana Hansen (Princess Jasmine in Disney California Adventure’s “Aladdin”) and Wesley Alfvin, a soloist and member of Disneyland’s Dapper Dans, who brought along his peers in the quartet — Jim Campbell, Jon Schoenherz and Drew Tablak — to sing another Sherman tune. Hahn made the calls at the urging of Sherman who told him, “there are some of the ballads that I can sing, but I’m not a singer; I’m a songwriter.” 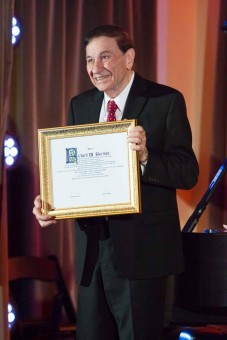 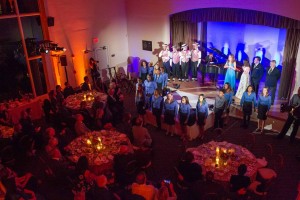 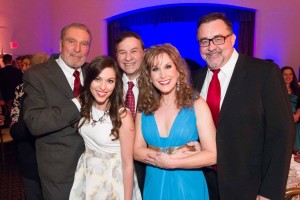 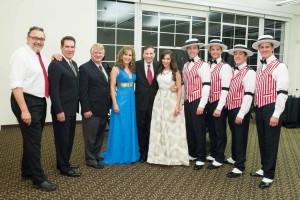 All the guests agreed to participate “because of who Richard is” and … “it was such a love fest,” Hahn added. “They were all great to lend their voices to this special.”

The show is jam-packed and Hahn admits having to edit it down from about 90 minutes, but PBS “gave us every second of those 60 minutes.”

“The whole reason for doing this is not to do anything other than share Richard’s genius with the audience,” he said. “So, we’ll get it into DVD form soon and streaming, but I also want to put it online for free for people to see. This is a gift that needs to be given.

“It’s not about the money or the commerce,” Hahn continued. “In this case, it’s about sharing the brilliance of someone who’s given us so much joy in our lives. To turn around and give that back to the audience is a huge treat.”

The DVD, with an expected release date in 2016, will likely include “a couple of songs” that didn’t make it into the broadcast special.

The advisory committee comes from the museum’s executive director Kirsten Komoroske and board president Ron Miller “trying to pull in some leadership from the community, not just for fundraising and awareness but also just for advice,” Hahn said.

“In part it’s to say Diane was such a guiding light for that place and, with sadness, she’s not with us anymore. She’s irreplaceable but if we put together a group of … artists, filmmakers, community leaders and politicians, they can help advise and steer the museum in the future.

“We meet periodically and we get a lot of updates from Kirsten just asking specific opinions on different issues for programming, for exhibitions, for educational issues,” Hahn continued. It’s Komoroske’s “brain trust, somewhere she can turn and ask, ‘what do you think?’ ”

“I think the Disney family is at a turning point right now,” Hahn said. “The museum has never been healthier but, sadly with Diane’s passing a few years ago, they’re trying to look at the long haul. They’re turning their attentions, rightly so, to education. And it’s a great idea for that museum.

“They will always have an audience there to go visit the artifacts and history of Walt’s life. But to keep it a living place, I think they’re going to turn to arts education,” Hahn continued. “That’s what the (gala) night was about and that’s why people and the community in San Francisco particularly stepped up to support it.

“When Ron Miller and Kirsten (Komoroske, executive director of the WDFMuseum) asked me to produce the gala, they said they wanted … a great night of entertainment.”

Hahn couldn’t think of anything better than inviting Sherman to perform and “have the museum honor him somehow. That’s when we came up with the idea for the Diane Disney Miller award.

“It’s the start of something I hope they do regularly, which is take people in the entertainment business — sometimes associated with The Walt Disney Company and sometimes not — but people who’ve given so much to the audience and honor them for their work.”

Sherman agreed to perform and was honored to be the first recipient of the museum’s Diane Disney Miller award. The PBS show was filmed at the same time as rehearsals for the gala.

Other gala participants included Bill Farmer, who served as emcee; the Dapper Dans from Disneyland; Jodi Benson, the voice of Ariel, who flew to San Francisco from Atlanta to sing; and the Youth Chorus of Oakland, which sang “It’s a Small World” with the audience. 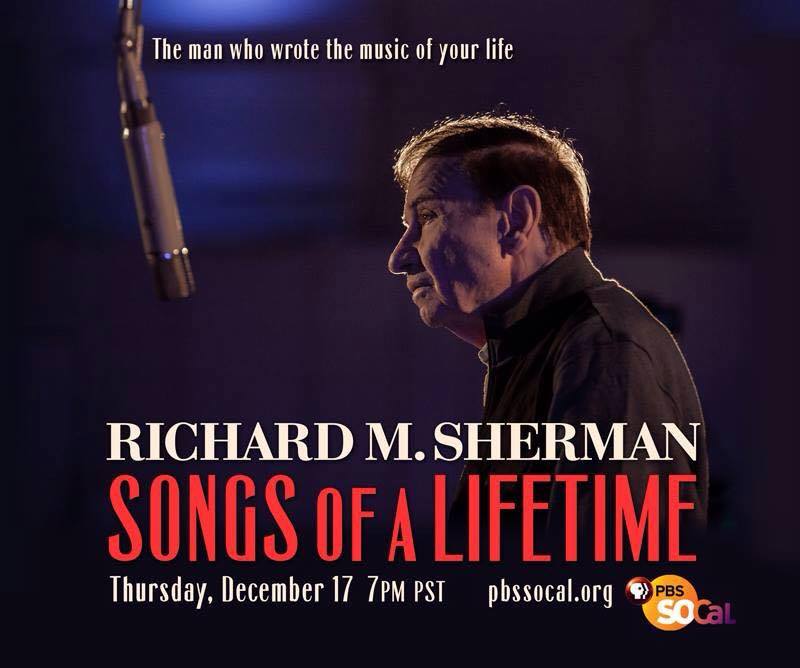 “It was really great,” Hahn said. “We had a small audience of maybe 175 people, which was always the plan. But these are some incredibly generous people.” The museum “raised probably close to a half-million dollars in one night from these people who saw that arts education in the Bay Area and across the country is one of the most important things we can do.

“It was a great evening and I’m proud to have produced it,” Hahn said. “There was entertainment, delicious food and a silent auction” of things like sheet music signed by Richard Sherman, drawings from Andreas Deja, Floyd Norman and Pete Docter, who were there. One of the owners of the San Francisco Giants auctioned off the opportunity for a kid to be a bat boy for a game.

“We live in a very generous country and people surrounding the Walt Disney legacy are very generous, people like John Lasseter, who auctioned off a trip on his steam train around his property which is extraordinary.

“… John got up on stage and talked about the museum as a spectacular institution and something we want to get behind. He raised an unspeakable amount of money for people to go up (to the Lasseter Family Winery) and have fun with him for a day. It was great for John; great for the people who donated; and, great for the institution. That was the kind of spirit around the event.”

Lasseter is “a beneficiary of Walt Disney’s legacy, as am I. That’s why people like us were willing to help out that night.”

Hahn said there was a good turnout of people from Pixar, Disney and Lucasfilm. There was also a lot of support from high-tech companies in the San Francisco area.

“I think (the Miller family was) truly surprised by the love that came back to them. I kept saying, ‘you guys don’t realize the kind of love and respect people have not only for Walt Disney but they also love and respect what you’ve done with this museum and what the museum means to the community.’ I think the evening really validated that for them and showed them really how important the institution is to the community of people who love and adore what Walt Disney means to them. I hope they do it again and I’m sure they will. It’s been a great way to communicate with people in our industry.”