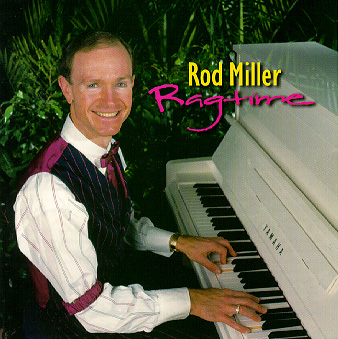 When I lived in Southern California and was a frequent visitor to Disneyland, my preferred place to hangout was at the table near Rod Miller, the legendary Ragtime Pianist of Refreshment Corner on the end of Main Street. Many nights I didn’t make it any further into the park than Coke Corner just because Rod was entertaining.

As fans we survived refurbishments, ancient pianos, sticky key new pianos, severe weather, and much more. But in the end, Rod, who started his career in 1969, made guests happy for 30+ years, but in the end couldn’t endure 8-hours of playing a day due to the toll it took on his body, (he had suffered a severe spinal injury as a kid after which doctors fused his spine).

That’s not to say Rod has given up on playing. He still does concert gigs around the area (and at the Walt Disney Family Museum) and has even been known to sneak behind the ivories at Disneyland now and then.

Not only was Rod a great entertainer, he had a prodigious memory for music. He could play over 600 songs by request and continued to learn new songs even after his retirement.

If you never saw Rod Miller in person, the good news is that there are quite a few videos of his performances on Youtube.

This video is from 2000 and features Rod Miller and one of his proteges Alan Thompson Jr. performing original arrangements of four-hand Ragtime.

Thanks Rod for the memories. Can’t wait to hear you play again in person one day.