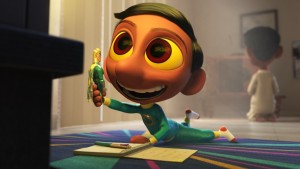 “Sanjay’s Super Team” Comes to the Con — Director Sanjay Patel and producer Nicole Grindle are taking Pixar Animation Studios’ new short to San Diego’s Comic-Con International next month for its North American premiere and a peek behind the scenes of the production process. The Super Story Behind the Pixar Short “Sanjay’s Super Team,” slated for Thurs., July 9 at 11 a.m. in the Indigo Ballroom, Hilton Bayfront, reveals the unique inspiration for this incredibly personal film that features superheroes like never before. The short debuts in U.S. theaters in front of Disney-Pixar’s “The Good Dinosaur” on Nov. 25, 2015.