How close did we get to Walt’s vision of EPCOT? 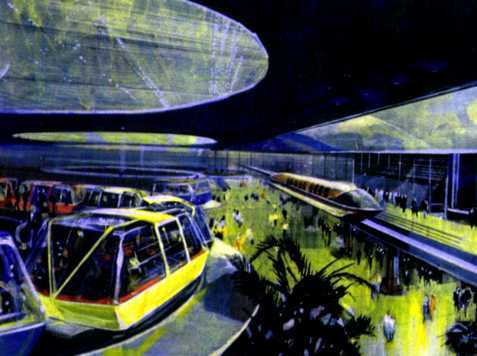 Before Walt Disney World there was Project X, Walt Disney’s ambitious plan to reinvent how we live in his “Experimental Prototype Community of Tomorrow.” Most Disney fans are familiar with how the EPCOT we have today is only a shadow of the great urban designed complex Walt Disney had originally envisioned. It was a visionary idea that Walt was working on until the last moments of his life.

But how realistic was this idea. A recent article in Esquire magazine combines some research that’s has appeared in a recent slate of books and a quote or two from Disney Imagineers who were close to the project, to examine how close to shaping the real future Walt Disney actually got.

It all began with a vision of a wheel. Folks would call the circumference home, while a climate-controlled city center would house corporations from all over the world. Between the urban and suburban would lie the greenbelt, dotted with parks, golf courses, and anything else paradise had to offer. A web of electric monorails and car-sized movers would act as the spokes, zipping residents to and fro. No more grueling commute. No more noisy streets. No more of life’s little frustrations.

Walt Disney called it the “Experimental Prototype Community of Tomorrow,” and he wanted it yesterday

You can watch the TV show where Walt announced his plans for EPCOT here:

With the movie Tomorrowland still in theaters, its interesting to think about how close we came to building the real EPCOT. But the dream died with Walt. It will probably take another person as visionary as Walt was to bring us a version of EPCOT that just make work. Who knows, that person could be alive right now marveling at the clue Walt left for future generations.