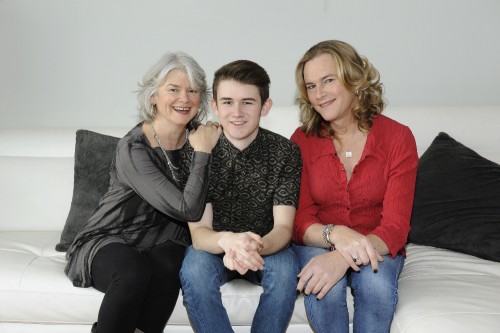 If you watched the Bruce Jenner interview on 20/20 a few weeks ago, you probably saw a trailer for this new docu-drama series coming to ABC Family. Becoming Us follows the life of Ben, a teenager living in Illinois, who’s dad is now Carly, a proud transgender woman. Ben is dating Danielle, a senior who’s about to graduate high school who also has a dad who’s transitioned into being a woman. The show follows Ben, Danielle, and their family and friends as they live their lives with a transgender family member.

At first watch, there was a clear amount of pros and cons about the series. The show is shot in the docu-drama style, and produced by Ryan Seacrest, so it becomes the phenomenon of knowing some of these situations are created and a large amount of lines are scripted, and painfully sitting through both. Some of these people cannot read a scripted line or be in a set-up situation to save their lives. It’s not their fault, it isn’t their profession. Still, it is rough. Add on top of that a weird social media framing device, where various status updates help start a scene, and all confessional interviews are viewed as if on Facebook. The opening credits are done as a “Draw My Life” YouTube video. It doesn’t work and comes off as cheesy.

On the plus side, Carly rocks. She is the bomb-diggity. She is incredibly strong, especially when dealing with hesitancy from family members. The girl can also act, which makes any situation she’s in feel real, and not like someone pointing a camera in her face said “ACTION!” Danielle also has a really moving conversation with her dad, discussing how she hates the judgement she gets, which brings her, and the viewing public, to tears. Ben’s older sister does a great job becoming completely comfortable on camera, while Ben’s friend Lathan brings some thought-provoking ideas and comments to the table that are great for the viewer to think about and further research.

The biggest issue, right out of the gate, is Ben. I realize the show will also show his progression, but at the moment, he comes off as a brat. He is off-putting to the nth degree. Constant sighing and eyerolling towards Carly, his mom, and anyone who has a pulse, makes you immediately hate him. He’s the main character, and I can’t stand him. The preview for future episodes makes me think he will change, but at the moment, it’s ticking me off.

Becoming Us premieres Monday June 8th at 9pm EST on ABC Family. I would definitely suggest giving the pilot a look and seeing if it’s your sort of thing. I usually don’t care for this genre, but Carly is so darn rad, that I may have to tune in for more, especially since this show is so important for a multitude of reasons.