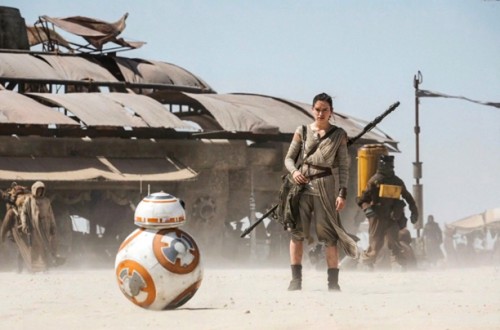 “Generally speaking, you’re going to see us release, in a very careful way, certain elements of the film as part of a carefully designed marketing plan as we get much closer to the film,” said Iger.

“This is already a very strong franchise, but a film has not been released in 10 years. We’re not treating this as something that is brand new,” Iger said. “We’re mindful of the fact that there’s a whole generation of people out there that were not as steeped in the Star Wars lore and not as in love with the franchise as an older generation.”

One of things you will see is new merchandising and video games related to the film:

“We’ve already got some increased product in the marketplace, but the real ramp-up from the consumer-products perspective won’t come until just a few months prior to the release,” said the CEO.

There’s also the possibility that Star Wars will make its way to the small screen and your mobile device with a new streaming service.

“With these channels and these brands — ESPN, ABC, Disney, maybe even down the road something related to Star Wars and Marvel — we do have the ability as a company to take product, specifically filmed entertainment, television, movies, directly to consumers, and we got some development underway to do just that,” said Iger.

For those theme park fans waiting for the big plans that are to be announced for Disney’s theme parks we still have some waiting todo.

“We have a huge opportunity there,” said Iger. “We’ve had single attractions, Star Tours, in multiple places around the world … and some Jedi training-academy related shows here and there, but the opportunity here in the U.S. and around the world is tremendous, and we’re doing some development work on it.”

I hope they’re doing more than just development work on it. But that does ring true with what I heard about Iger asking Imagineering to start over with fresh ideas once J.J. Abrams and Lucasfilm President Kathleen Kennedy had laid out the general path for the next three Legacy films.

According to some inside sources, that we may have to wait until after Star Wars: The Force Awakens is released to learn more about how Disney will add Star Wars to the parks.