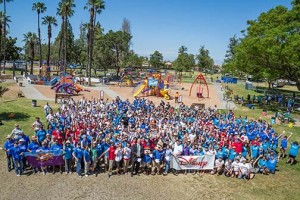 Disneyland’s cast member VoluntEARS made a huge impact at west Anaheim’s Twila Reid Park yesterday. As part of the Disneyland Resort’s 60th anniversary, more than 700 volunteers transformed the 27-acre park, building a new KaBOOM! playground for neighborhood kids to enjoy. This is the largest ever project for KaBOOM and the most VoluntEARS to ever assemble for one project.

“We are proud to join with KaBOOM! to continue Disneyland Resort’s 60-year legacy of giving back to the community,” said Disneyland Resort President Michael Colglazier. “By creating this playground, we are giving Anaheim families a new space to be active and make memories together.”

This is Disney’s 60th KaBOOM! playground nationwide, built by the largest group of volunteers to date. From hauling dirt to assembling the new play equipment, volunteers from the Anaheim Family YMCA, city of Anaheim and the Corporate Volunteer Council of Orange County (CVCOC), along with Anaheim residents, Disney VoluntEARS and organizers from KaBOOM!, completed the playground in eight hours. The playground design is inspired by drawings by kids in the Anaheim Achieves after school program that took place on a special Design Day event in February.

Since 2007, Disney has been committed to creating playgrounds where children and families can play together and be active. This commitment is an extension of Disney Magic of Healthy Living, an initiative that partners with parents to inspire kids to lead healthier lifestyles. By the end of 2015, Disney’s support will bring the magic of play to more than 83,000 kids and families across the country. 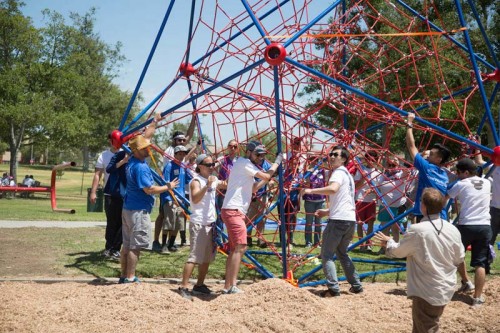 “It is an honor to celebrate Disneyland’s 60th anniversary milestone with Disney by giving back to the Anaheim community,” said KaBOOM! Founder and CEO Darell Hammond. “At KaBOOM!, we believe every kid deserves a childhood, filled with balanced and active play, so they can thrive, and our partner, Disney understands this well. Their work is creating a more playable community and ensuring a bright future for all kids in Anaheim.”

“This is another wonderful opportunity for our children in Anaheim to benefit from the kindness of community-focused organizations in our City,” said Anaheim Mayor Tom Tait. “Our children need places to play, where their parents can also gather and get to know each other. I call that being a good neighbor. I am grateful to KaBOOM!, Disney, the Y, and all who are making this possible.”

“This playground does more than get kids and families active. It creates lasting memories,” said Rich Good, YMCA President and CEO. “After today, echoes of kids’ laughter will fill this place. Children will learn how to swing on their own, they’ll shout for joy when they make it to the bottom of the slide and they’ll make new friends through imagination play. We are here today giving back because we were once those kids, and now, we want families to know that this community is here to help them reach their full potential.”

Disney’s VoluntEAR program does so much good for local communities. If you’ve ever been a cast member, what sort of projects have you worked on?