Editor’s Note: Chris has decided to partake in the Ultimate Marvel Marathon. He’ll be sending us reports during the various intermissions. I’ll update this post as more come in. 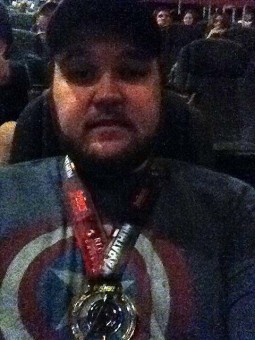 A couple of friends and I have decided to partake in the Ultimate Marvel Marathon. Are we crazy? Yeah, probably. But I’m really excited about seeing some of my favorite movies on the big screen again.

We showed up to the theater a couple of hours early and it was already filling up. I didn’t know what to expect but as I walked in, immediately I knew I was, as my friend said, “with my people.”

Nobody was in full costume, except the professional Thor and Black Widow in the lobby. With our ticket we also got special 3D glasses for Age of Ultron and our medals. I’m a little disappointed that they didn’t wait to the end to pass them out, but I understand that it would be a logistical nightmare to wait.

There is an air of excitement in the theater. I’m pretty sure I’ll be leaving with a few new friends. 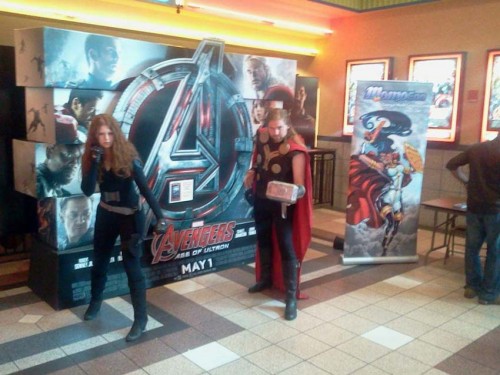 We just finished watching The Incredible Hulk. They’ve been holding trivia contests in between the movies, which has been fun, but our Emcee learned a valuable lesson: don’t argue with a theater full of comic book nerds about what Spider-Man’s position in the MCU is.

We’re still going strong but the night is young.

We just finished The Avengers and I’ll be honest, I’m beginning to wear down. I’ve definitely nodded off a few times but I was determined to stay awake for The Avengers because it’s still my favorite.

Despite people wearing down, there is still excitement in the theater. Everyone cheers every time Stan Lee is on screen as well as big sweeping shots like when the camera circles around the Avengers.

We just finished Guardians of the Galaxy and are getting ready for Age of Ultron. One of the cool things that they did was show special interviews with the cast of Agents of SHIELD in between the Phase 2 movies. Clark Greg talked about Coulson’s history in the MCU. Ming-Na Wen talked about the strong females on the show and Adrianne Palicki talked about how the stories of the show and movies are connected.

I’ll let you know what my thoughts are on the new movie, but I’m going to take a nap first.