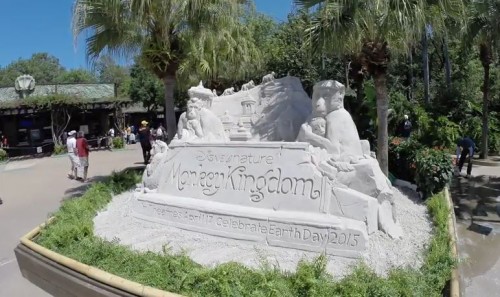 That giant sand sculpture in front of Disney’s Animal Kingdom we teased last week is now finished. The whole thing celebrates the opening of the Disneynature film “Monkey Kingdom.”

The movie follows Maya, a clever and resourceful blonde-bobbed monkey. Maya’s world is forever changed when she welcomes her son, Kip, into her complicated extended family. Like all families, Maya’s has more than its share of colorful personalities—and she’s determined to give her son a leg up in the world.

When their longtime home at Castle Rock is taken over by powerful neighboring monkeys, Maya’s whole family retreats, and she uses her street smarts and ingenuity to uncover untapped resources amidst strange new creatures and unsettling surroundings. Ultimately, they will all have to work together to reclaim Castle Rock, where Maya can hopefully realize her dreams for her son’s future.