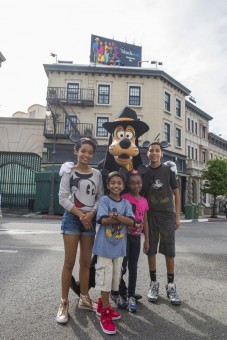 (L-R) ActorsÊYara Shahidi,ÊMiles Brown,ÊMarsai Martin, andÊMarcus Scribner,Êfrom the cast of the ABC series “black-ish,” pose March 28, 2015 with Goofy in front of a billboard for their show on the Streets of America at Disney’s Hollywood Studios theme park in Lake Buena Vista, Fla.ÊThe four visited Walt Disney World Resort with their families to kick off their summer break and celebrateÊthe success of the showÕs first season. (Mariah Wild, photographer)