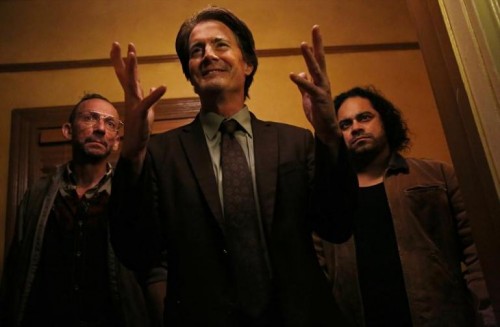 The official plot synopsis from Marvel’s Agents of S.H.I.E.L.D. Season 2 Episode 13 is out. And it’s the Villians, led by Skye’s father Doctor Cal Zabo, who are out for revenge.

In the episode, titled “One of Us,” Cal seeks revenge on Coulson by assembling a team of Super Villains to destroy S.H.I.E.L.D. Meanwhile, May calls on renowned Dr. Andrew Garner (Blair Underwood), her charismatic ex-husband, with a crisis that threatens to tear the team apart.

In this clip from Marvel, we see that Cal, Karla, and their band certainly know how to make an entrance:

“One of Us” was written by Monica Owusu-Breen and directed by Kevin Tancharoen. “Marvel’s Agents of S.H.I.E.L.D.,” airs Tuesday at 9:00 PM ET on ABC!