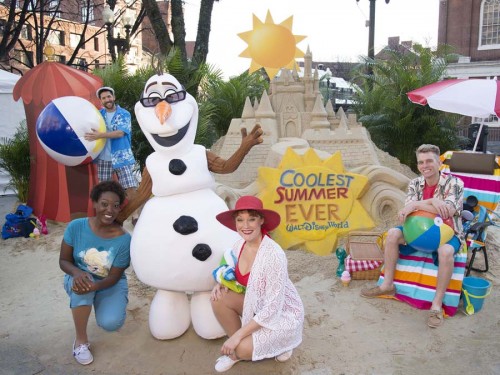 Were you in downtown Boston this morning? If you passed by Faneuil Hall you may have seen the kickoff for Walt Disney World’s summer promotion – the “Coolest Summer Ever.” There is, of course, a Frozen theme and Olaf is the host.

To get the summer season kicked off, Walt Disney World will host its third 24-hour day on May 22-23 at the Magic Kingdom. Olaf will play host at the event.

To announce the 24-hour event and the cool summer season, Disney today brought to life a warm summer scene inspired by Olaf’s dream, creating a 20-foot-wide beach complete with a Cinderella Castle made of sand in the middle of winter-weary Boston.

Surprised pedestrians near historic Faneuil Hall were greeted by Olaf and joined by playful beach-goers in summer attire with beach chairs and beach balls – all reminders of an exciting season of fun ahead at Walt Disney World Resort and a welcome relief from the city’s near-record snowfall approaching nine feet. 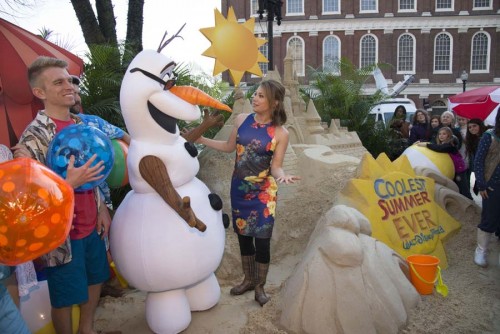 The Coolest Summer Ever will see the return of Frozen Fun to Disney’s Hollywood Studios. Princess Anna, Queen Elsa, Kristoff and Olaf and citizens of Arendelle will appear daily in shows and experiences at Disney’s Hollywood Studios, June 17-Sept. 7. Guests will find cool thrills this summer including a royal processional, a sing-along show, Frozen-themed treats and merchandise, plus a Frozen fireworks display above Hollywood Blvd.

To be honest, I’m a little underwhelmed by the promotion for this summer. But maybe Disney will come up with something more. There’s a rumor there will be something Big Hero 6 related. Perhaps more character appearances?

The 24-hour day party will be great, I’m sure. You can’t beat seeing the sunrise from within the park. The park will probably get crazy busy overnight (it did last year), but if you plan to stick it out for 24 hours, that’s probably a good time to find a quiet place and re-energize.

Will you be going to the 24-hour day party at the Magic Kingdom?