Disney’s Big Hero 6 has quietly reach big box office numbers both domestically and worldwide rocketing it up to the 2nd most successful film of all time from Walt Disney Studios (behind, you guessed it – Frozen). It also just took home the Oscar for best animated feature. Not too shabby. 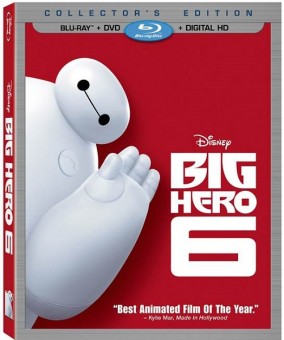 As of today you can officially bring home your own copy of Disney’s Big Hero 6 on DVD or Blu-Ray and watch Baymax, Hiro and pals as often as you like.

With all the heart and humor audiences expect from Walt Disney Animation Studios, “Big Hero 6” is an action-packed comedy adventure that introduces Baymax, a lovable, personal companion robot, who forms a special bond with robotics prodigy Hiro Hamada. When a devastating turn of events catapults them into the midst of a dangerous plot unfolding in the streets of San Fransokyo, Hiro turns to Baymax and his diverse group of friends — adrenaline junkie Go Go Tomago, neatnik Wasabi, chemistry whiz Honey Lemon and fanboy Fred — who transform into a band of unlikely heroes.

Also on the DVD is the Oscar Winning animated short Feast. Relive the wonderful moments of a dog who follows his owners love interests via their food as many times as you want.

If you order your copy of Big Hero 6 from Amazon, a portion of your sale goes to help The Disney Blog. Thank you.